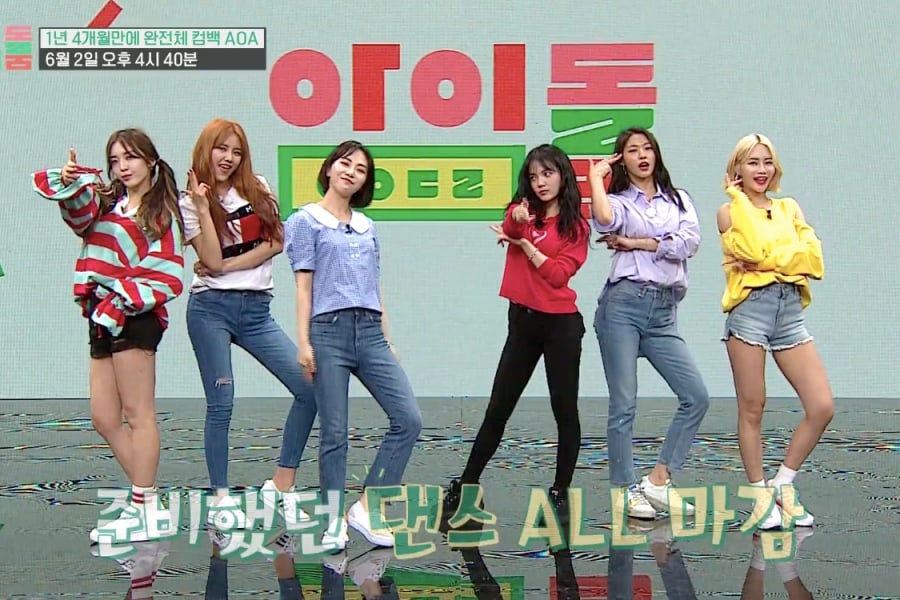 On the latest episode of “Idol Room,” AOA showed off their powerful side through dance covers of several hit songs by male idols!

During the girl group’s appearance on the June 1 episode of the JTBC variety show, host Jung Hyung Don asked the members about their dance cover of BIGBANG’s “Bang Bang Bang.” Jimin explained that they had covered the song at their solo concert last year, and Jung Hyung Don requested that they perform the choreography one more time for the fans who had been unable to attend the concert.

The AOA members replied, “Actually, we’ve prepared a few [other] songs as well.” They explained that they had also practiced the choreography for Taemin’s “Move” and BTS’s “DNA,” but that Chanmi would be dancing to “DNA” by herself. Hyejeong explained, “She’ll be dancing on her own because [the choreography] was too hard for us,” with Seolhyun agreeing, “It was too difficult.”

However, the other five members still joined Chanmi in an entertaining attempt to recreate one of the key formations of the “DNA” choreography.

Watch the full video of AOA’s dance covers below!