[Photos | Video] TOP shared photos from his trips to Kyoto, Singapore and Europe in July and September 2014

TOP shared photos from his trips to Kyoto, Singapore and Italy (Europe) during the Tazza 2 premiere event in Yokohama 20141009. The pictures were taken by TOP during his trip, some were taking by his manager and for some he asked strangers in the streets to take them. According to his own account he likes travelling alone. 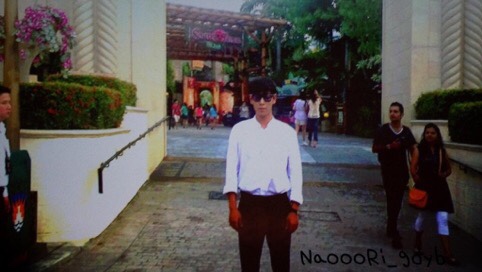 TOP in Singapore at Universal Studios on Sentosa Island Sept 2014 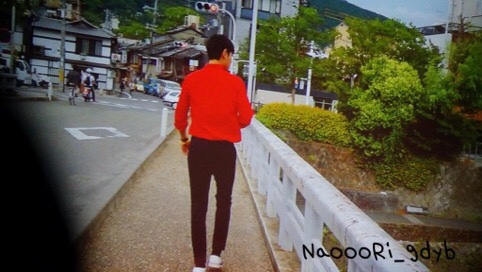 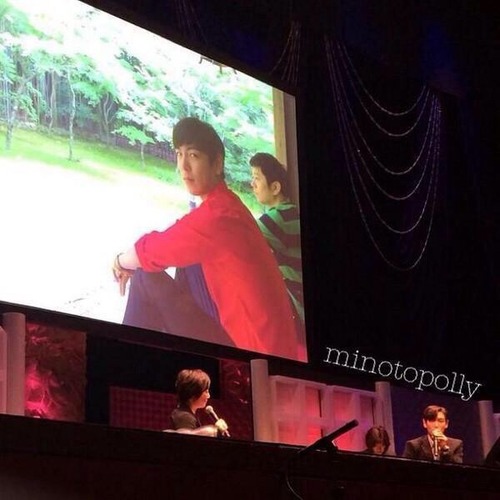 Pictures above and below with red shirt / red trousers:
TOP went to visit a friend in Kyoto and spent time at his art studio, visiting temples in the area and enjoying free time in local parks. Below pictures / video: TOP at the art studio. 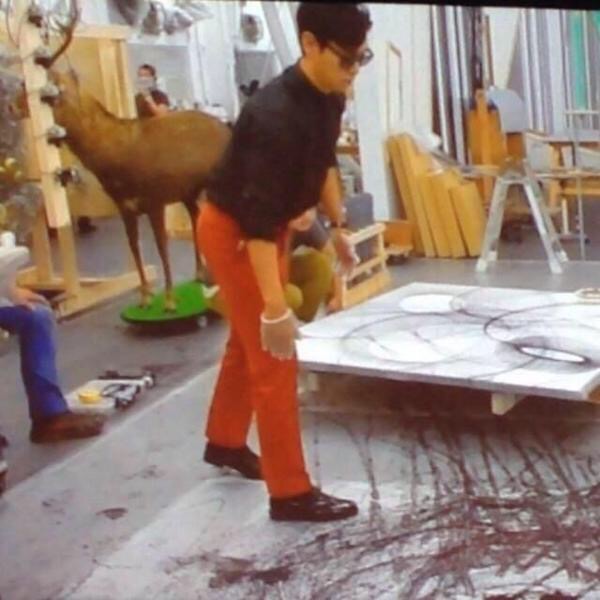 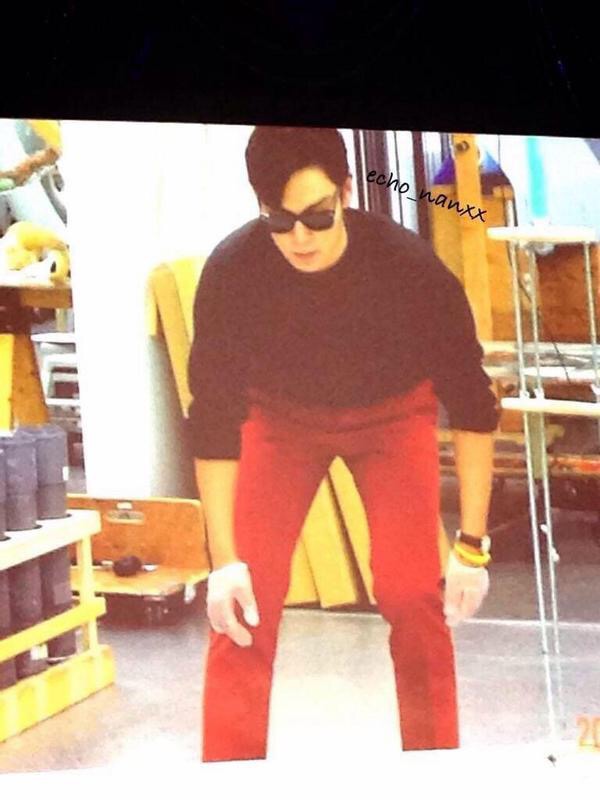 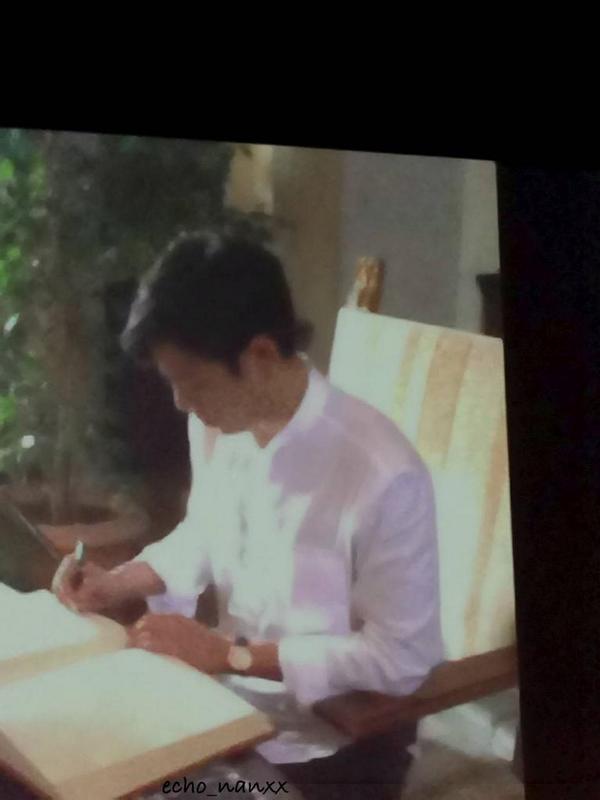 TOP in Florence signing the hotels "golden book" as "Korean's George Clooney",
inspired by a little alcohol and seeing George Clooney's signature on another page in the book. 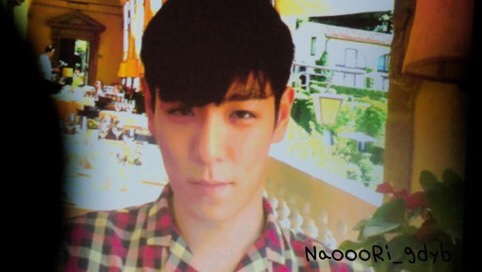 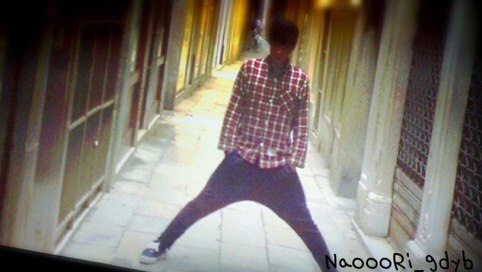 In Venice early in the morning walking along empty streets at 6am and in the hotel. 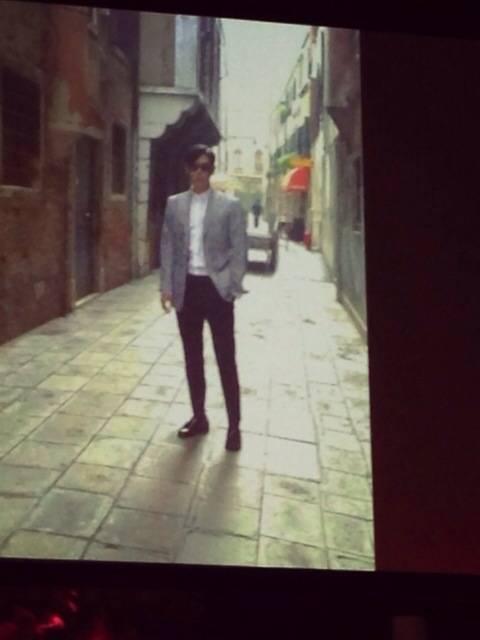 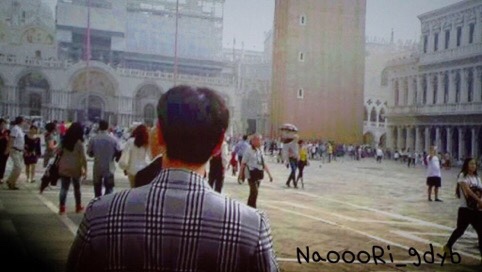 TOP in Venice, Italy. He also went to visit one of the glass manufacturers on
Murano (a neighbouring island to Venice) (top pic of the ones with chequered jacket) Sept 2014

[Photos] TOP shared photos from his trips to Kyoto, Singapore and Europe during the event in Yokohama today 20141009. Shared by @NaoooRi_gdyb and as credited above, picture credits: see logo on pic (originally taken during TOP's trip, mainly by friends but according to TOP he also asked strangers to take them).

Accompanying report from the Yokohama event by @MShinju 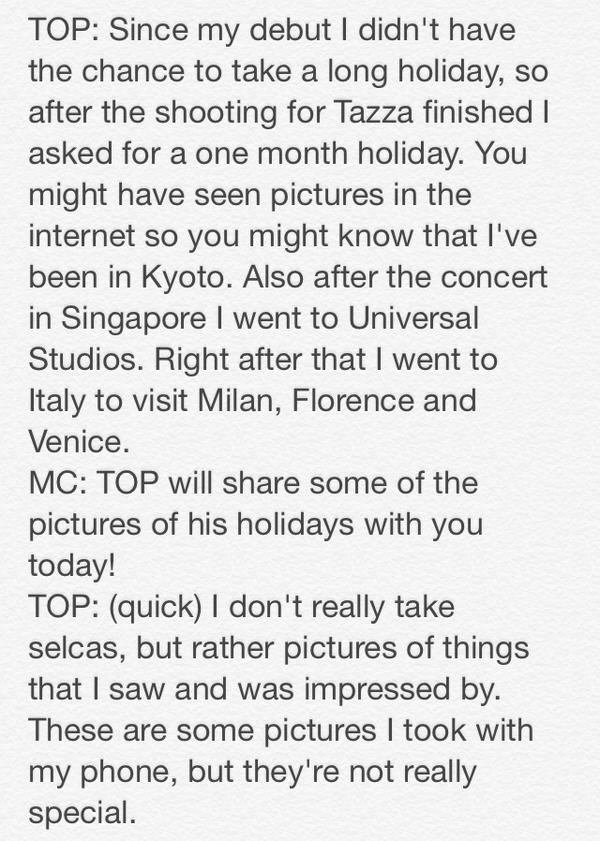 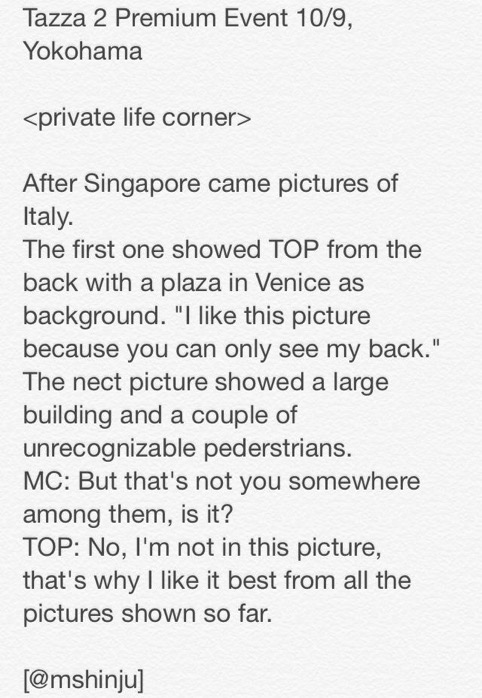 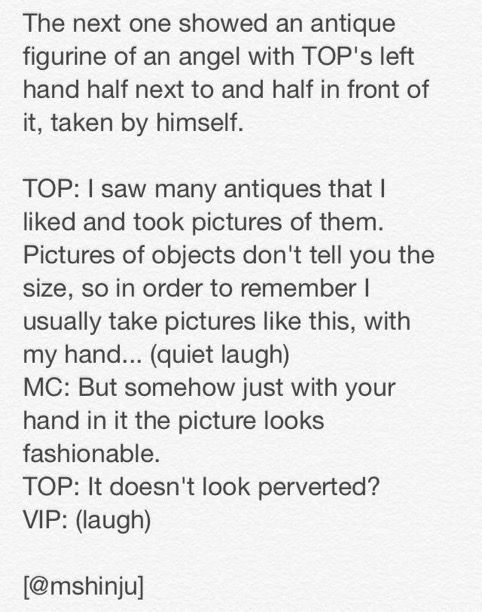 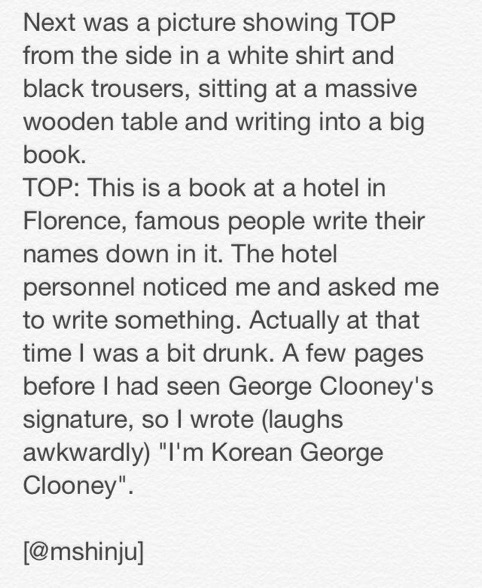 Full fan report compiled by bigbangupdates with thanks to @mshinju for the fan account, and Echo_Nanxx@weibo and naoooRi_gdyb for the photos and videos:

TOP: (Explains that the nude scene in Tazza 2 was the most difficult.)
MC: We will show the scene right now so that you’ll understand better what it’s about.
Fans: (Excited screams)
TOP: Sigh.
Fans: Laugh.
TOP: (In Japanese) Let’s go let’s go!!

He explained that he did many ad libs for Tazza 2. “The director told me that if I wanted to try and add things I came up with spontaneously. He said that if they’re not good, we can just cut them out.” Examples he mentioned:

– The scene were Daegil confesses his love to Mina. “I wanted to express how nervous and excited Daegil was. There’s a part where he wants to leave the front garden but doesn’t remember how he came in, so he stops in the middle of the act and turns around to take the right way. That wasn’t in the script. I added it on the spot.”

– “There’s a scene where Daegil’s rival drags him into a basement. The whole dialogue of that scene was ad lib. In the script, the only thing was written that Daegil is dragged into the basement while crying. We came up with the dialogue on the spot.”

MC: So no doubt this movie has been a new step for you grow as an actor. Would you agree?
TOP: (Dead serious I’m always growing. (Starts grinning while the interpreter translates.) (In Japanese) I’m joking.

TOP: Since my debut, I haven’t had the chance to take a long holiday, so after shooting Tazza, I asked for a one month holiday. You might have seen pictures on the internet so you might know that I’ve been to Kyoto.

Also, after the concert in Singapore, I went to Universal Studious. Right after that, I went to Italy to visit Milan, Florence, and Venice.

MC: TOP will share some of the pictures of his holidays with you today!
TOP: (Quick) I don’t really take selcas, but rather pictures of things that I saw and was impressed by. These are some pictures I took with my phone, but they’re not really special.
TOP: After the concert, I went to Universal Studious alone. I rode the attractions alone too.
VIP: Laugh.
TOP: It was really fun. I enjoyed some of the rides so much that I went again after getting off. Some of them I rode 5 times in a row.

(TOP showed photos of him with super serious expressions.)

MC: Why do you look so serious?
TOP: When people see an adult being all excited and laughing all by himself, they’d think he’s crazy. But inside, I was very excited!

Next picture of TOP writing on a big book.

TOP: This is a book at a hotel in Florence. Famous people write down their names in it. The hotel personnel noticed me and asked me to write something. Actually, at that time, I was a bit drunk. A few pages before, I had seen George Clooney’s signature, so I wrote (laughs awkwardly) “I’m Korean George Clooney.”

The next one showed an antique figurine of an angel with TOP’s left hand. 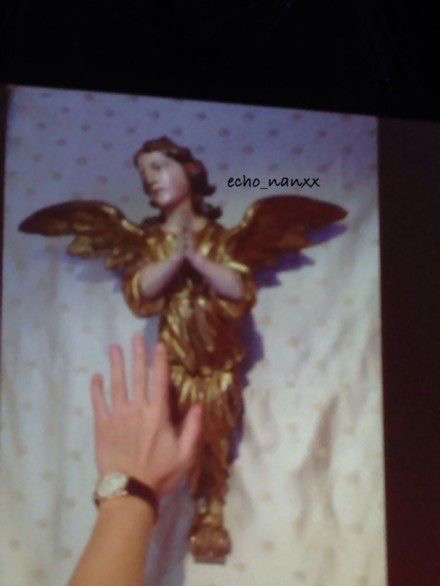 TOP: I saw so many antiques that I liked and took pictures of them. Pictures of objects don’t tell you the size, so in order to remember, I usually take pictures like this, with my hand.. (quiet laugh)
MC: Bot somehow just with your hand in it, the picture looks fashionable.
TOP: It doesn’t look perverted?
VIP: Laugh.

Picture of TOP from the back with a plaza in Venice as the background (NOTE by BIGBANGmusic: It is Piazza San Marco with El Duomo and the Bell Tower of Venice in the background).

TOP: I like this picture because you can only see my back.

Next picture showed a large building and a couple of unrecognizable pedestrians.

MC: But that’s not you somewhere among them, is it?
TOP: No, I’m not in this picture. That’s why I like it best from all the pictures shown so far.

Then a picture of TOP sitting on a hotel terrace in a pyjama shirt looking like he just woke up. 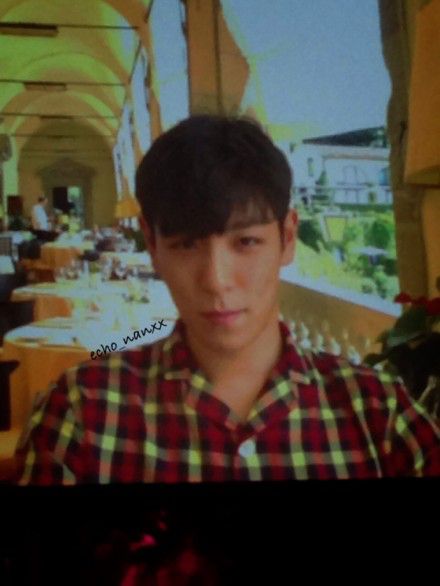 TOP: That’s while having breakfast at the hotel in Venice. (in Japanese) I was drunk.
MC: It seems you were drunk a lot!
TOP: I don’t usually drink in the morning! I only did it in those holidays in Italy. There are many good Italian wines, and I like wine a lot. That’s why I was drinking a lot.

Next a picture of TOP in black trousers and a pajama shirt.

VIP: Squeal.
TOP: This picture was taken in Venice at 6AM. I went out with my sleeping clothes alone. Venice is usually crowded with tourists, but going out at 6AM, the streets were completely empty.
MC: Such fashionable sleeping clothes!
TOP: Actually I was drunk since that hour (laugh)

The last pictures of Italy were from Murano, a group of islands close to Venice. TOP went to see famous glassmakers at work. He was very impressed by the chandeliers that were displayed.

TOP: Every little piece of this chandelier (in the photo) is handmade. I have a lot of respect for artists who make them.

He also showed a picture of colored glass artworks that he bought to decorate his house.

The last part were pictures from his holiday in Kyoto where TOP spent one week with a Japanese artist he’s friends with, Kohei Nawa. (see pics above in red trousers and red shirt).

n most of the pictures, TOP was seen from the back wearing a bright red shirt and black trousers, walking through Kyoto. One picture showed him in a park walking towards a swing.

TOP: Actually after this picture was taken, I rode the swing for about an hour. The first 30 minutes, I was sitting down but then I got bored so I stood on it for the next 30 minutes.

There were pictures of a temple and a Japanese garden.

TOP: I don’t remember the name of this place, but this is me looking at plants.
MC: I think this might be Daitokuji Temple.

When the pictures of the garden were shown, TOP tried to speak Japanese a bit. A tiiiny bit. Basically he said ”Kyoto” and very carefully tried to pronounce it correctly. Then he started a phrase in Korean saying that he met Kohei Nawa in Kyoto.

Then two photos of TOP looking at paintings by Kohei Nawa. The first, he explained, was at a small hotel that Nawa and his family (TOP said “family” in English so it might not be his actually family) designed. The second one showed TOP looking at 2 large black modern art paintings. TOP spoke with a lot of admiration and appreciation for Nawa.

The last photo showed TOP with transparent rubber gloves hunching down towards the camera. After that came a short video that made sense of the picture. (see video above)

The video was taken in a special kind of art studio. TOP explained a bit while the video was playing.

MC: Did it turn out well?
TOP: Sigh (Shakes head) Not really.

He explained that he doesn’t like doing art himself that much. He prefers watching artists while they work. Before, there was a picture in which TOP was observing Kohei Nawa at work. “It helps me take a breath when I need a break from my own work.” 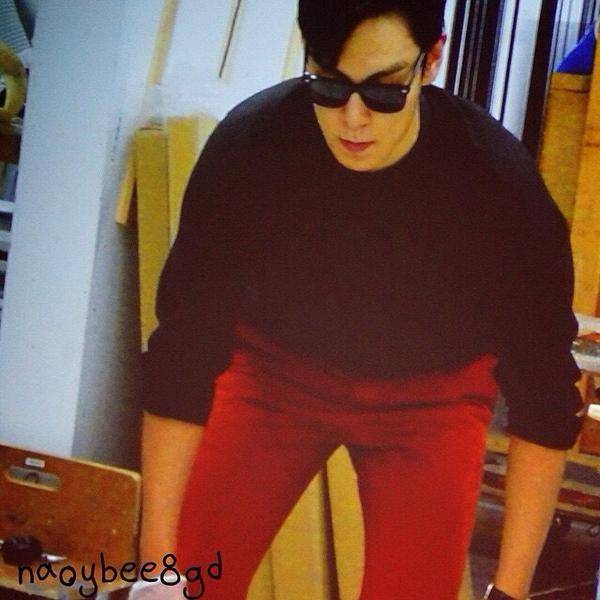 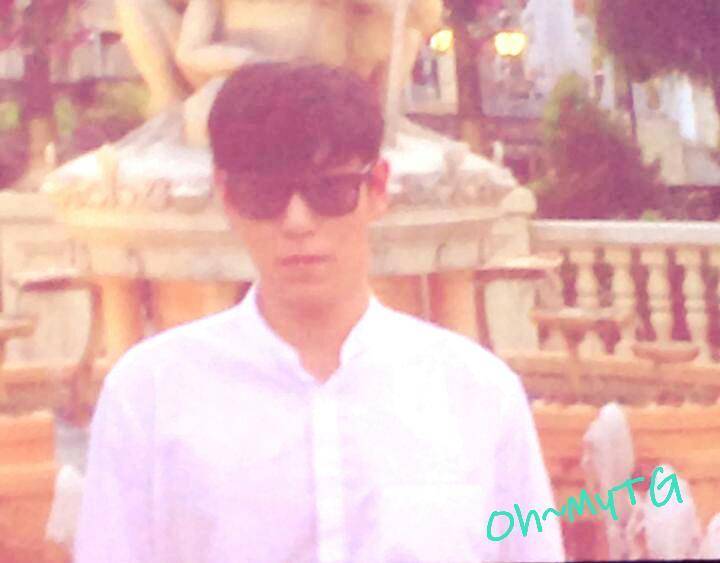