[Oh!Ssen Focus] YG Artists Dominate the First Half of 2017, and Now it’s G-DRAGON 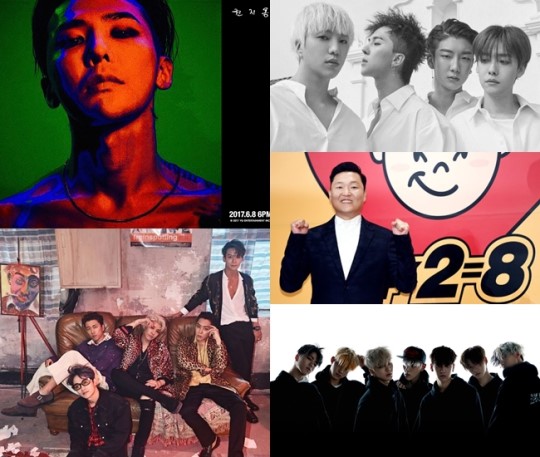 [OSEN=이소담 기자] Korea’s music scene in the first half of 2017 was dominated by YG artists. The first was WINNER, and then, SECHSKIES, PSY, iKON made a comeback. Now, BIGBANG’s G-DRAGON is to come back with a solo album.

In April, WINNER and SECSKIES released albums. WINNER released their new album titled “FATE NUMBER FOR” after a 14-month break, and the title song “REALLY REALLY” has been high up on the charts for nine weeks now. YG’s newcomer SECHSKIES released an album to celebrate the 20th anniversary of their debut, and for the first time in 17 years, the group became No.1 on both the online and offline charts.

In May, it was PSY and iKON. PSY released his 8th album “4X2=8”, which took the charts by storm upon release. iKON released “NEW KIDS : BEGIN” on May 22, and the title songs of the album “BLING BLING” and “B-DAY” are going viral on YouTube and around the world.

Now, it has been officially announced that G-DRAGON will be making a comeback as a solo artist on June 8. It will be his first solo album in four years, after his “COUP D’ETAT” album that contains “CROOKED” in 2013. G-DRAGON has shown diverse charms whether as a member of the group BIGBANG or in unit groups such as GD&T.O.P or GD&TAEYANG. However, fans have had special expectations for his solo albums as they show his unique color as an artist. The powerful teasers of G-DRAGON’s solo album are definitely raising the expectations to the maximum.

G-DRAGON will also be holding solo concerts. He will go on a tour under the title of “G-DRAGON 2017 CONCERT: ACT III, M.O.T.T.E”, and the first concert will be held in June 10 in Seoul. Then, he will hold 23 concerts in 19 cities around the world including cities in North America, Asia, Oceania, and Japan. His concerts will be the epitome of a concert that can be put on by a contemporary solo male musician. All of his concerts will be above arena-level, with some of them even in stadiums and domes. G-DRAGON is turning 30 this year, which means the beginning of the third stage of his life. He will surely dominate the music scene in the first half of 2017.