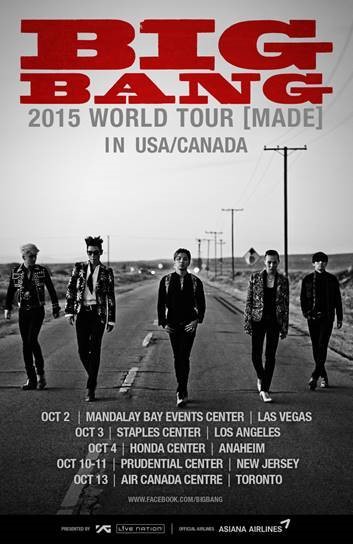 Starting from “BIGBANG 2015 WORLD TOUR ‘MADE’ IN SEOUL” held in April this year at Olympic Gymnastics Hall in Seoul, BIGBANG holds world tour in line with their comeback. As part of the world tour, BIGBANG will have a North America tour soon, three years after their first tour in the region in 2012. BIGBANG staged fancy performances in LA and New Jersey in world tour “ALIVE GALAXY TOUR” held in November, 2012, and then put their name in the list of “2012 Best Concerts” selected by New York Time in December that year, to be recognized for their talent and popularity.

There have been a couple of cases where a Korean idol boy group had a concert tour in North America. However, BIGBANG is the first one to have such a large-scale tour twice in the region. Notably, as the entry barrier for Asian singers is very high in the North American pop market, BIGBANG’s large-scale tour there proves the team’s strong ticket power and big influence in the region.

BIGBANG is replacing their own records not only in North America but also in Japan. In Japan, BIGBANG has become the first-ever foreign artist to hold a dome tour for three years in a row.

The recent world tour of BIGBANG has been acclaimed by Korean fans for its dynamism created by blockbuster videos, laser lightings, and new songs that are released every month. As such, it has been drawing keen attention from foreign fans as well.

BIGBANG begins the world tour overseas in earnest, by having concert on May 30 and 31 in Guangzhou, China. In the tour, BIGBANG will meet 1.4 million fans around the world, by having 70 concerts in 15 countries including China, Japan, Southeast Asian countries, and North American countries.

In line with the tour, BIGBANG is also releasing their second single “BANG BANG BANG” and “WE LIKE 2 PARTY” on June 1 at 12 o’clock in the night, which will follow the footsteps of “LOSER” and “BAE BAE” that dominated domestic music charts during entire May, to create sensation once again.