BIGBANG Releases Second New Song on June 1... “WE LIKE 2 PARTY” 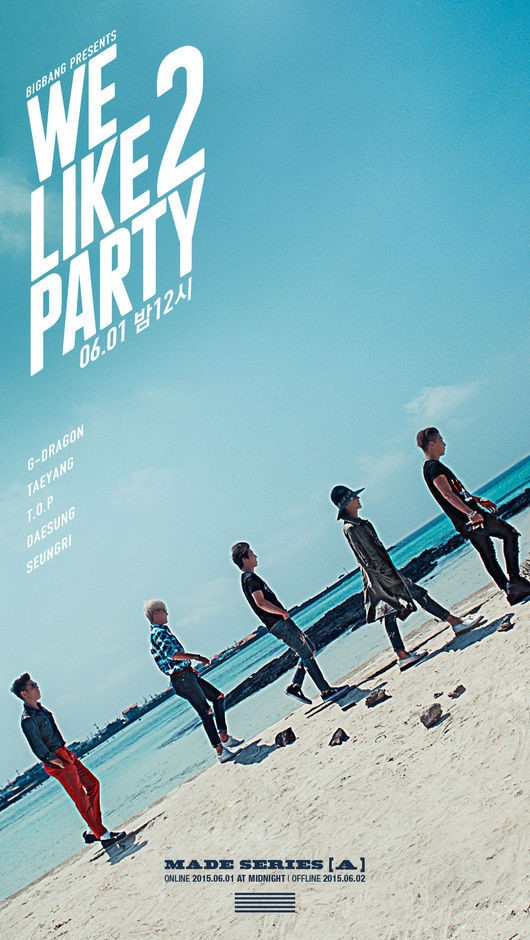 [OSEN=??? ??] Group BIGBANG has unveiled the title of their second new song to be released next month following “BANG BANG BANG”. The title is “WE LIKE 2 PARTY”.

On the 28 at 9am, YG Entertainment posted an image of “WE LIKE 2 PARTY” on its official blog (www.yg-life.com), to heighten fans’ expectations. “WE LIKE 2 PARTY” is the second new song for the “A” series of BIGBANG’s comeback project “MADE”, which will be released on the 1 of next month.

The image of “WE LIKE 2 PARTY” to follow “BANG BANG BANG” looks cool. It shows BIGBANG members in casual look, walking in a row on the beach, which gives the feel of summer.

BIGBANG recently shot the music video for the new song in Jeju Island. It is known that the song is a cool and exciting summer song, just as the image shows.

Before the release of the summer image, “BANG BANG BANG” was announced to be a song to follow the footsteps of “FANTASTIC BABY” and “LIE”. Adding to that, “WE LIKE 2 PARTY” is expected to be a all the more exciting and dynamic summer song. Music fans are speculating that “BANG BANG BANG” to follow “LOSER” and “BAE BAE” and “WE LIKE 2 PARTY” will sweep music charts once again next month.

Meanwhile, reservation for album “A” will be received from May 27 to 31, and the album will be released on June 1 at YG E-SHOP and on/off-line record shops nationwide.