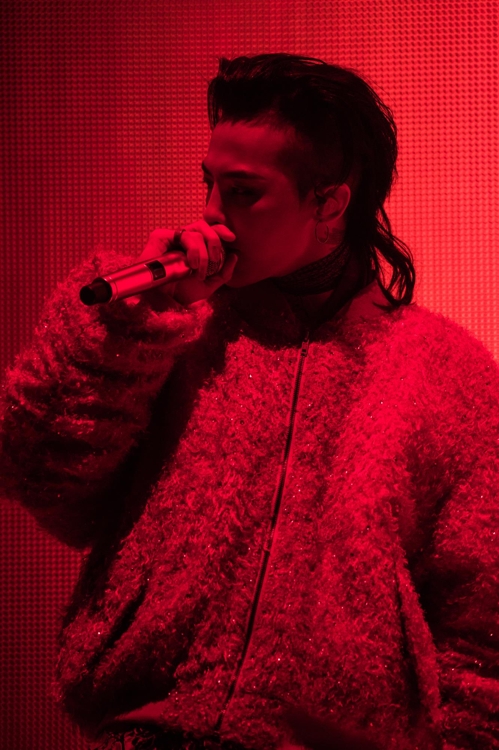 He filled the dozen-meter long stage wearing unique costumes, and the Seoul World Cup Stadium was filled with people from the ground to its third floor.

Even foreigner fans were spotted at the concert, and the audience sang the songs together with G-DRAGON. The stadium was filled with yellow light sticks waving to his every word and gestures. The tickets cost 110,000 won per seat, and the total ticket sale amounted to 440 billion won.

This is nothing new to G-DRAGON, who has grown to become a global star and the celebrity of the celebrities during the past ten years.

The concert was special in that G-DRAGON showed the KWON JI YONG side of himself on the stage as implied in his recently released solo album “KWON JI YONG”.

The costumes, and stage lighting, the main color of the videos were all red to make everything look simple, and the performances were arranged in the order of G-DRAGON’s solo albums released so far. 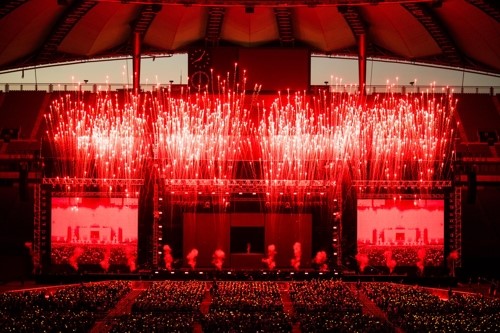 He sang “HEARTBREAKER” for the opening stage and introduced himself by saying, “I’m KWON JI YONG”.

He went on to say, “I’ve been through a lot, both mentally and physically, while preparing for this album, and it was hard. I’ve been living my life as G-DRAGON, and I forgot who I really was” and kept on singing his hit songs.

He rapped hard when he was performing “CRAYON” and sang to the sentimental melody of “THAT XX” sitting on the stairs.

He sang “THE LEADERS” together with CL, and “Palette” and “MISSING YOU” with IU, who came as a guest.

G-DRAGON said, “IU sent me a fridge as a present a short while ago, and it was filled with soju wrapped around with paper bands with my face on them.” IU said, “You have to drink hard if you want to finish them before you join the military.”

Something unexpected happened during the “OBESSESION” performance.

A female fan holding a yellow light stick jumped on the stage and tried to hug G-DRAGON. He didn’t panic and continued on with his performance. The staff led the fan down the stage. 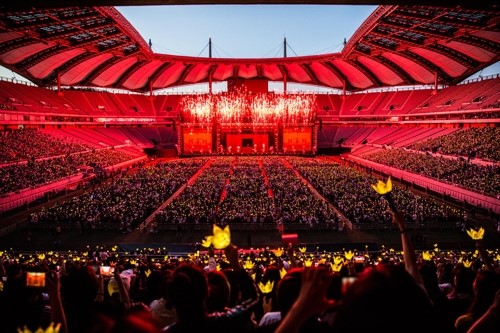 It was as if watching G-DRAGON and KWON JI YONG doing a duet. Although excitement was building up, the theme of the concert—“the thirty-year old KWON JI YONG”—was clearly expressed during the concert.

A video was played featuring his fellow singers; such as PSY, SE7EN, CL, and DARA; his parents and sister; staff members; and his manager talking about who G-DRAGON is or who KWON JI YONG is.

G-DRAGON’s dad said, “He never says no. He always says yes. He’s the best son to me.”

In the second half of the concert, G-DRAGON sang “BULLSHIT”, a new song in his new album, and said, “The aim of this concert was to show the less made-up me. G-DRAGON is also me, but it is an exaggerated and glamorous image of a singer. The goal is to show KWON JI YONG in a more natural state as the concert goes on.”

He went on to say, “This was my dream since I was a kid. I didn’t rest, and now I feel like I’m living a dream. It feels good, but sometimes I feel weird and the line between dream and reality becomes blurry. That’s why I try hard to get back to my original state of mind when I first started music. I don’t know what you like about me, but I hope you like the humble KWON JI YONG as well as the glamorous G-DRAGON.”

He asked the audience “I’m joining the military next year. I’ll be 32 or 33 by the time I’m done. Will you be okay with that?” and the audience replied, “Yes!”

The last song of the concert was the title track of his new album “UNTITLED”. It’s not his usual powerful hip hop song but a slow ballad, and it was a perfect finale to his concert.