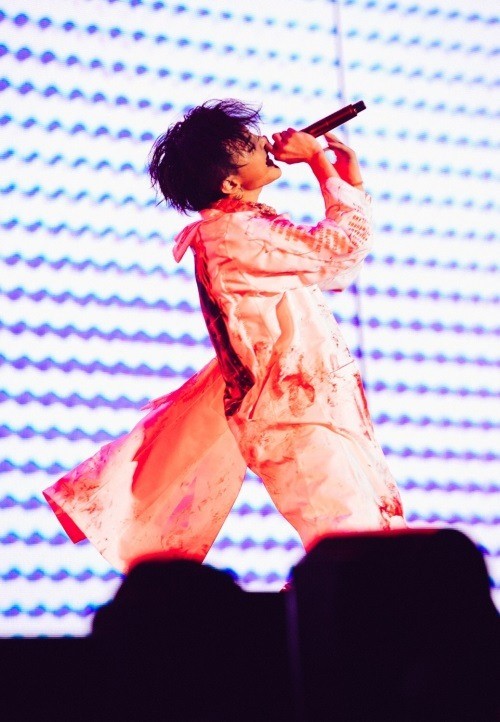 [헤럴드POP=박수정 기자] G-DRAGON has topped all the charts in Korea and is expected to do continue doing so for some time.

As of 9 AM on June 11, the title track of G-DRAGON’s new album “UNTITLED” was No.1 on the charts of Melon, Genie, Naver, Bugs, Mnet, Soribada, Olleh, and Monkey3. Other songs in his album such as “BULLSHIT” and “SUPER STAR” are also ranking high on the charts. The music video of “UNTITLED” posted 9,609,970 views on YouTube and is about to pass the 10 million mark in just two days after its release.

Such results are remarkable considering that “UNTITLED” consists of G-DRAGON’s singing and not his rapping. G-DRAGON also successfully kicked off his solo world tour “ACT III, M.O.T.T.E”.

The first concert of the tour was held at the Sangam World Cup Stadium on June 10, and 40,000 fans came to see G-DRAGON. The main color of his concert was red, and therefore, the opening stage and G-DRAGON’s costumes were all red, instantly grabbing the attention of the audience.

G-DRAGON performed a total of 24 songs including the songs in his previous albums such as “HREAT BREAKER”, “BREATHE”, “MICHIGO”, “CRAYON” and the songs in his new album such as “BULLSHIT”, “DIVINA COMMEDIA”, and “UNTITLED”. The audience sang along with G-DRAGON all throughout the two-hour concert.

CL and IU appeared as surprise guests and performed with G-DRAGON. There were a number of performances that were put on stage for the first time ever: the songs in his new album and his collaboration song with IU “Palette” were never performed before, and it left a deep impression on the audience.

G-DRAGON kicked off his world tour successfully with this Seoul concert. He will continue on his tour by holding concerts in Macao on June 17 and 18.