Watch: BIGBANG Cracks Each Other Up With Introductions And Entrances On Toy Cars On “Weekly Idol” 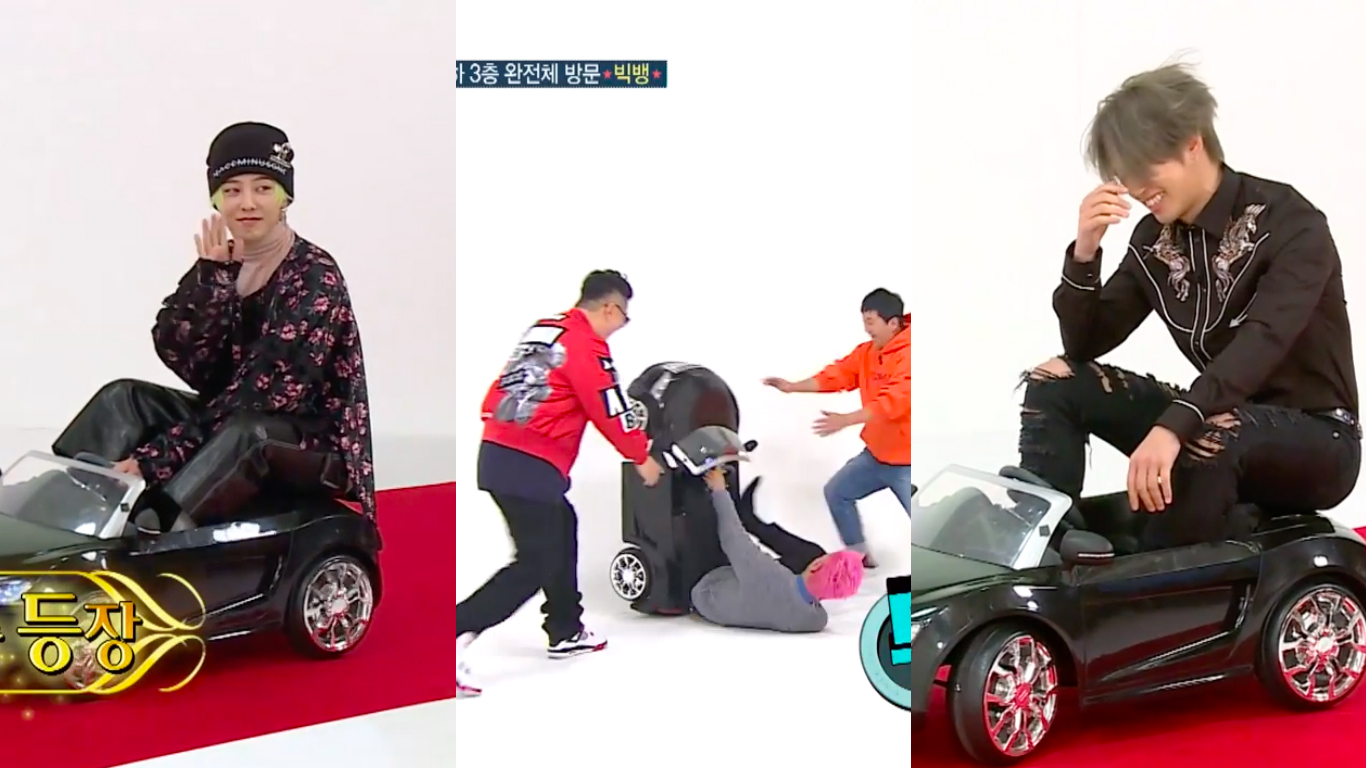 On the recent episode of “Weekly Idol” on January 4, BIGBANG appeared as guests and had a chance to introduce each other to the audience in their own special ways.

At the start of the show, BIGBANG made their entrance by riding toy cars. Watching G-Dragon come forth, Jung Hyung Don introduced him saying, “He is the number one successful K-pop star, acknowledged by Time Magazine.”

When the MCs told G-Dragon they’d be putting the cars away themselves, G-Dragon commented, “Nothing has changed in the past few years.” 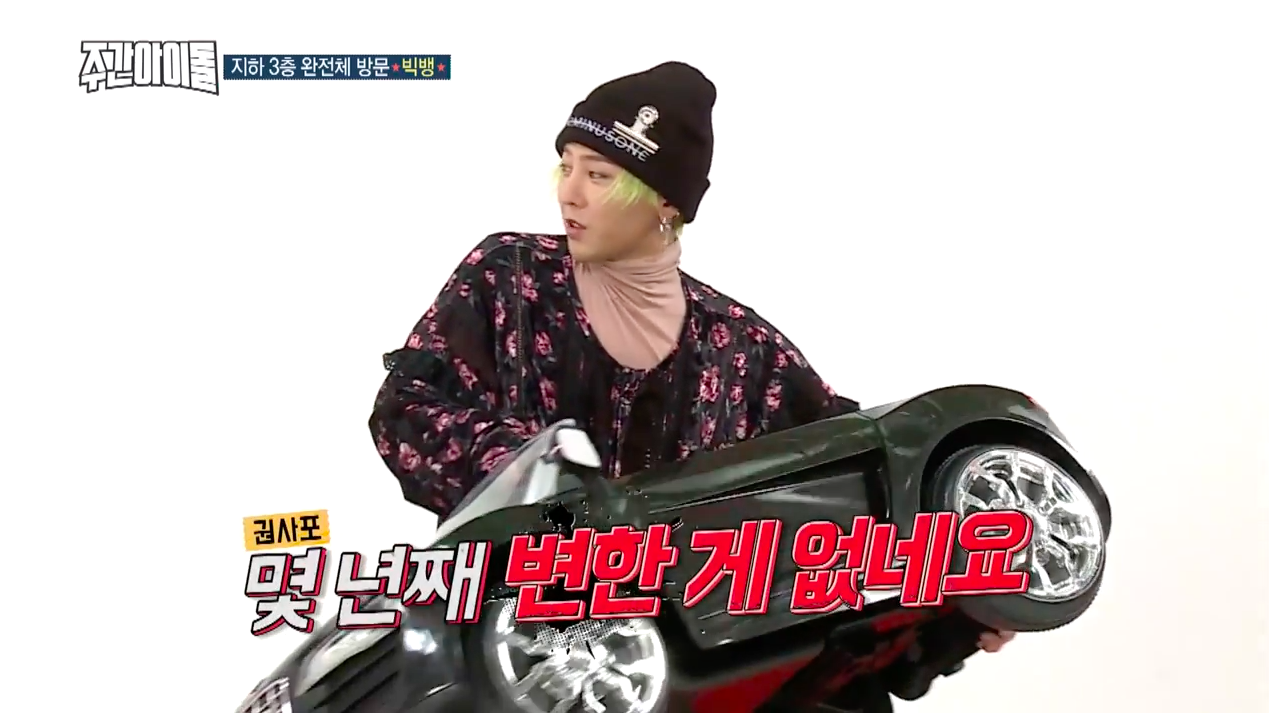 Jung Hyung Don then asked G-Dragon, “Is there a member who isn’t necessary in BIGBANG?” and G-Dragon cracked up his fellow members by answering, “Maybe one?”. 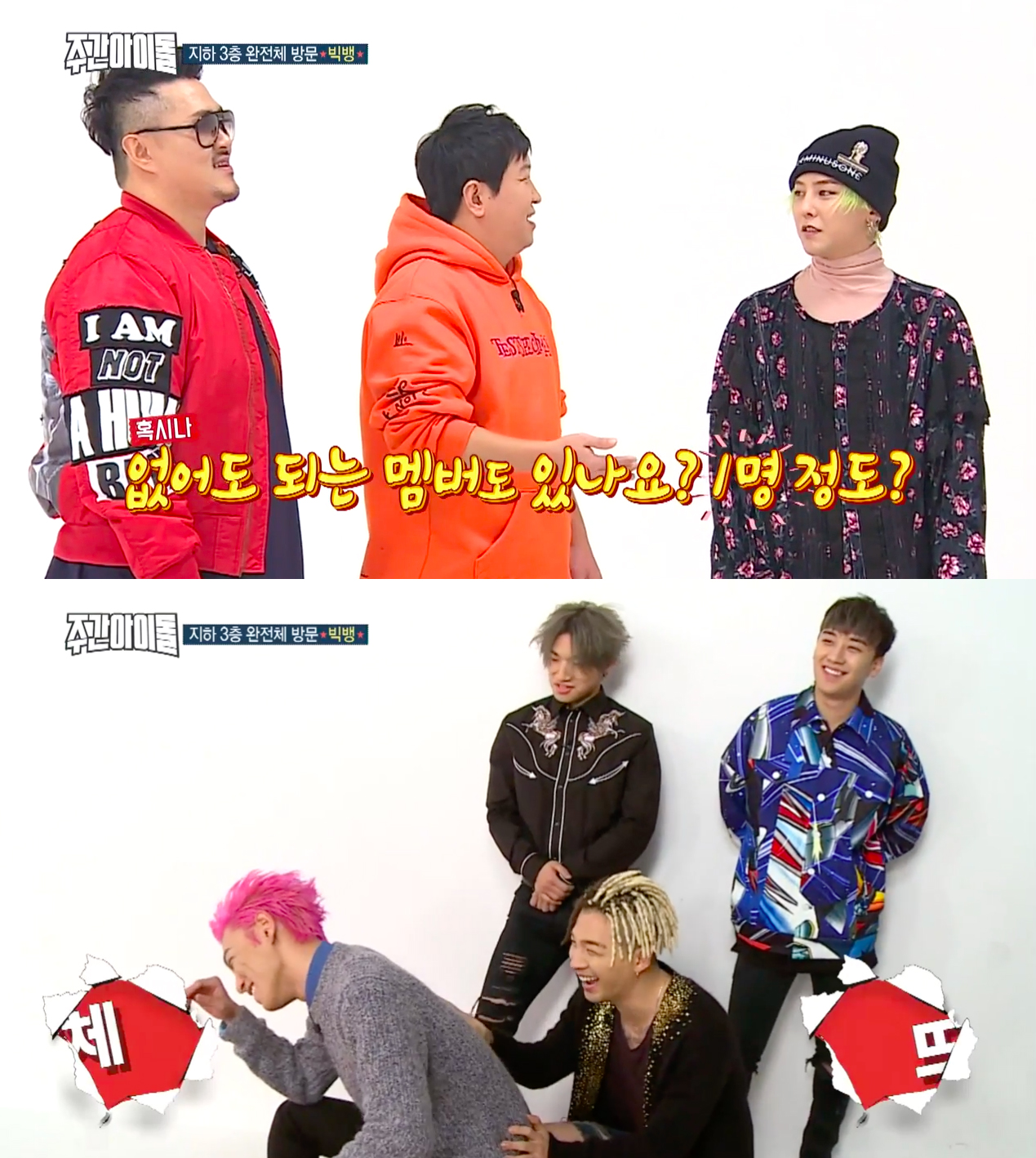 Jung Hyung Don then introduced T.O.P as, “An eccentric artist who is crucial in BIGBANG!” 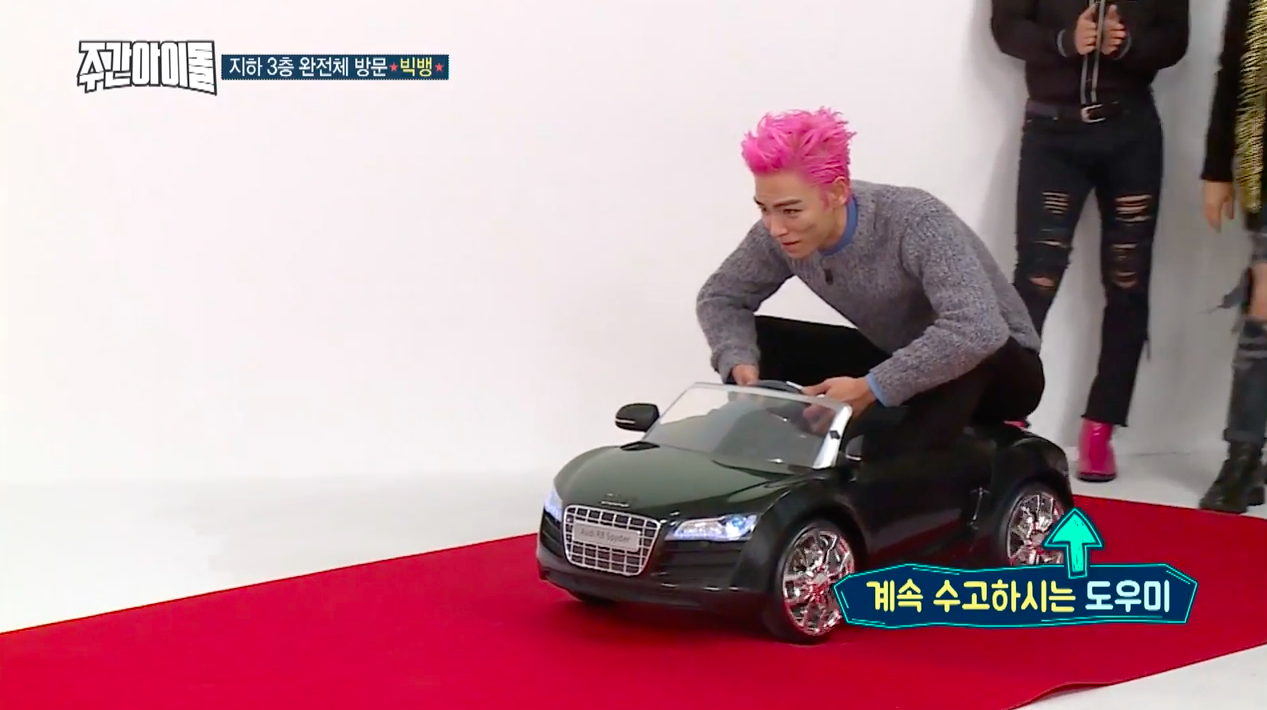 After T.O.P crashed his car into the wall with his toy car, Taeyang was introduced as having “a voice that melts souls.” Taeyang seemed to enjoy riding his car around the set as he circled it around to park it back at the beginning of the red carpet again. 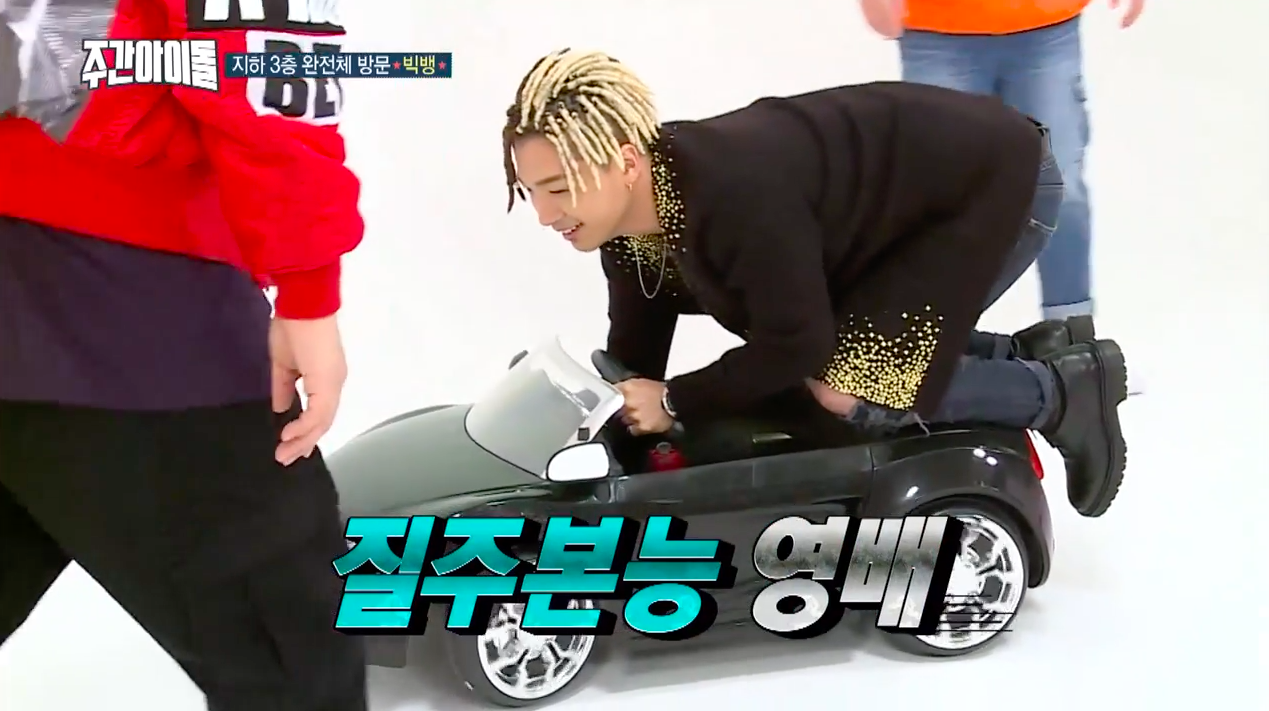 Then Taeyang introduced Daesung saying, “He’s Korea’s soybean paste, Japan’s natto, and China’s stinky tofu. In other words, he’s someone so charismatic that you can never get over him if you fall for him.” 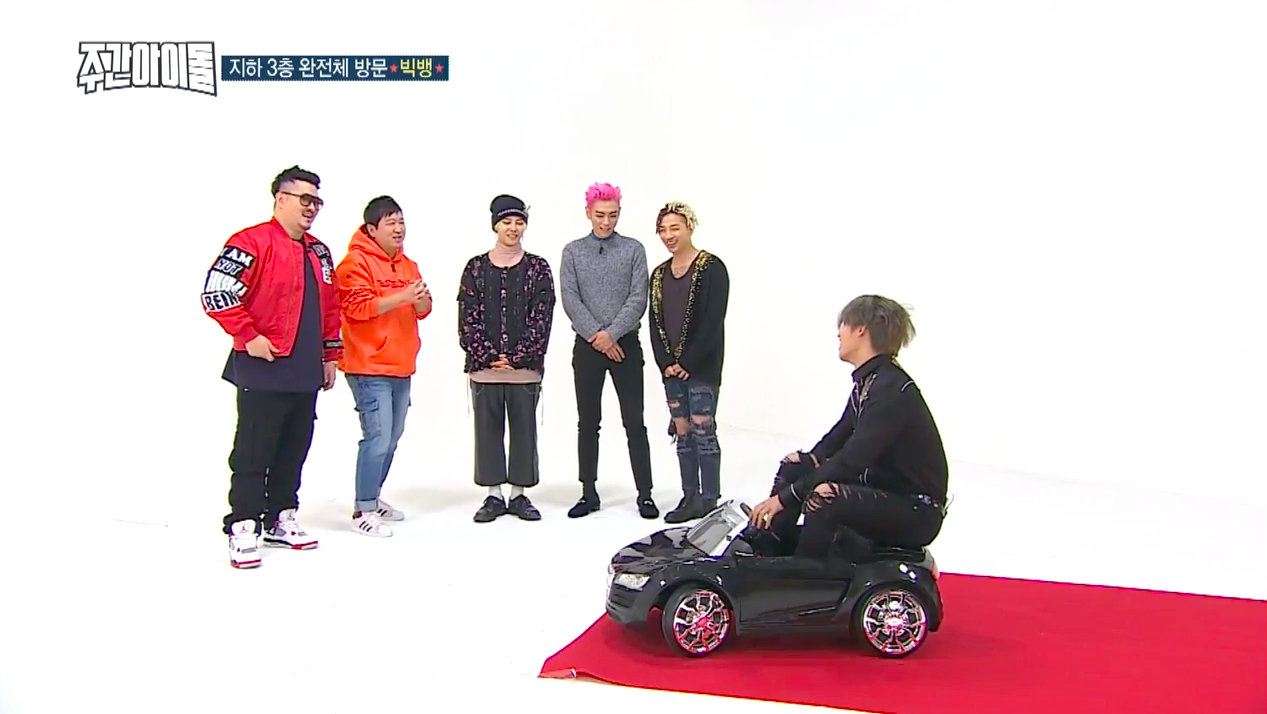 Finally, Daesung kept everyone laughing by introducing Seungri as “BIGBANG’s ‘episode’ machine. If it wasn’t for him, we wouldn’t be able to be on television shows.” Seungri then tried to prove his variety skills by driving into the set while lying down on his toy car, but G-Dragon commented, “It’s not funny.” 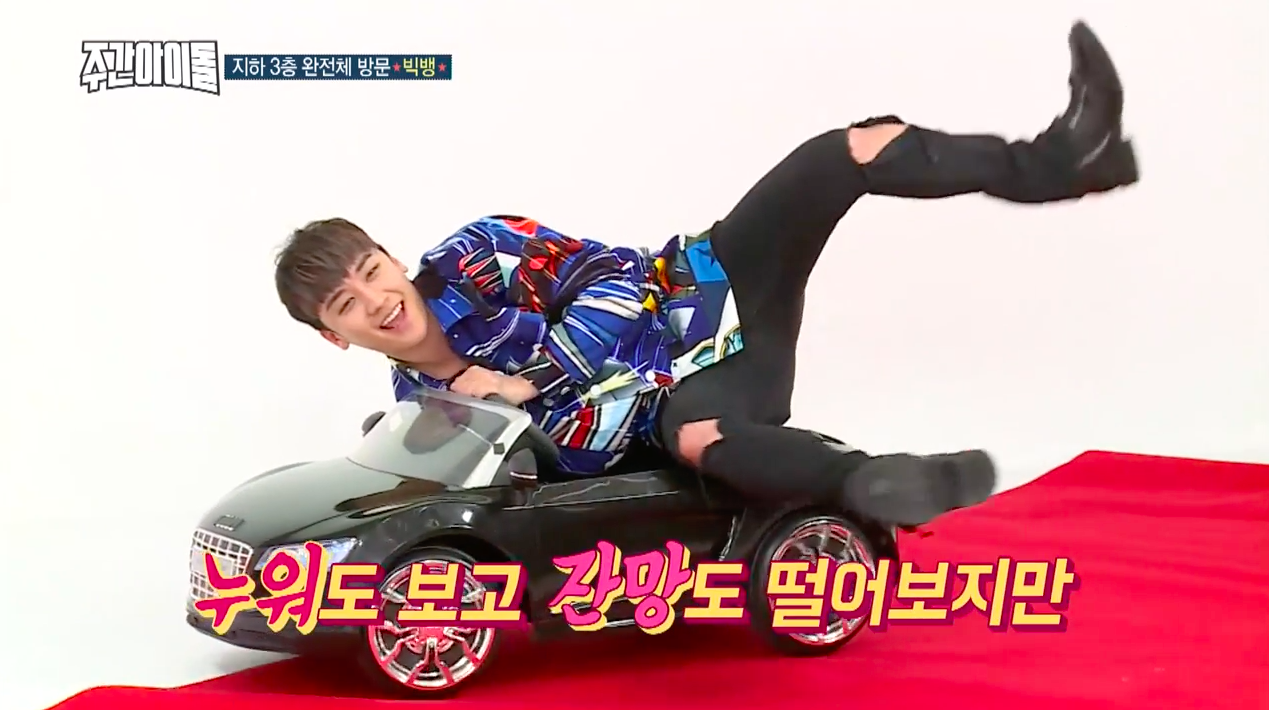 Watch the clip of their introduction below!