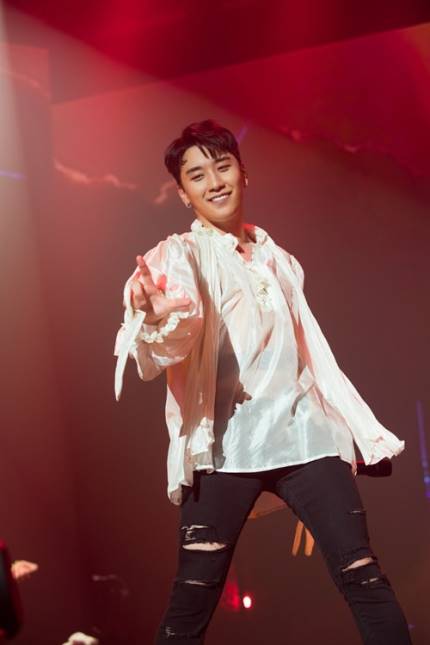 [엑스포츠뉴스 전아람 기자] Group BIGBANG’s youngest member did it. He made it up for the members enlisted in the army, and filled up the entire stage by himself.

The concert started 15 minutes later than scheduled. The fans waited for SEUNGRI despite the sweltering heat, although they were frustrated.

When SEUNGRI appeared on stage following the opening video, 4,400 fans who visited the scene roared. The concert began, and SEUNGRI performed songs such as ‘STRONG BABY’, ‘LET’S TALK ABOUT LOVE’, ‘GG BE’, and ‘GOTTA TALK TO YOU’. 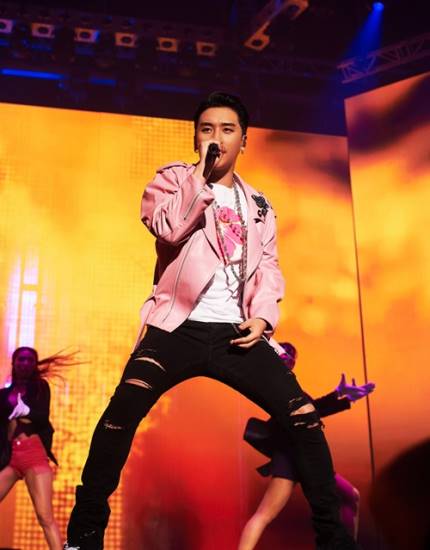 Then the bell suddenly rang, and SEUNGRI picked up the phone using his microphone. When SEUNGRI answered, “Is that you Jiyong?”, the fans roared. He led the fans excitement as if he was talking to G-DRAGON, and the scene was heated due to the fans’ excitement.

SEUNGRI stated, “It’s my first solo concert after 13 years of BIGBANG. I’ve had over 500 concerts and performed in huge stadiums with over tens of thousands of audiences, but I was worried since Jangchung Stadium felt too big for me. But a lot pf you came to make my worries go away. Thank you”, sharing his thoughts on opening his first concert.

He continued, “I’m happy that I’m getting so much love from you. Please enjoy the rest of the concert, which I prepared to make you all happy”.

He also mentioned a dream he had by stating, “I had this dream last night. I was the starting pitcher in a very important game. In the 9th inning with 2 outs, the coach gave me a very heavy ball. I threw it as hard as I could, and the ball went into the strike zone. I led the team to victory, and I feel like it illustrates my current situation”. 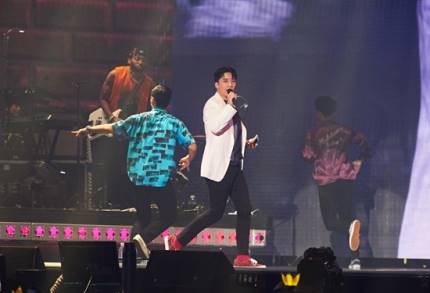 He added, “It’s as if I should do well as BIGBANG’s only member remaining in society to make our team win. I’ll do my best in dancing and singing, to make you all happy”. He yelled, “Let’s have fun tonight”.

SEUNGRI performed songs including his recently released song ‘1, 2, 3!’ and finished BIGBANG’s songs as his own. He performed songs such as ‘HARU HARU’, ‘LAST GOODBYE’, ‘IF YOU’, ‘HEAVEN’, ‘LIES’, ‘BANG BANG BANG’, and ‘FANTASTIC BABY’ by himself, and all the fans sang-along.

SEUNGRI often mentioned members of BIGBANG during the concert and revealed his loneliness. He stated, “My brothers sent me flowers for my first concert, although they would’ve been busy”. He also revealed that TAEYANG’s wife MIN HYORIN gave him the letter by stating, “My sister-in-law wrote the letter for TAEYANG while watching his video letter”. 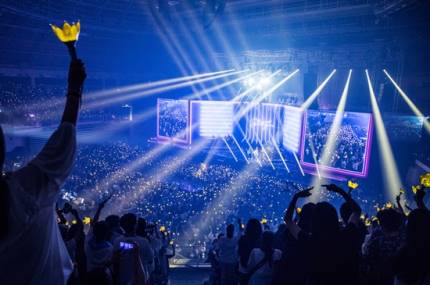 He added, “I feel like it was better when there were five of us. I miss my brothers. I miss my members”, revealing his thoughts on the members. He also notified his enlistment by stating, “I’ll go soon. Very soon”.

He stated, “I’ve been loved for 13 years” and revealed his gratitude on tue fans (VIP) for loving and supporting him. As he finished the concert he stated, “Please wish for BIGBANG and my comeback and happiness as always”.

The fans from China, Busan, and more came to meet SEUNGRI from far away despite the sweltering heat of August. SEUNGRI did his best to repay the fans support, soaking himself in sweat.

With his concert in Seoul, SEUNGRI will perform in Daegu EXCO and Busan BEXCO on the 15th and 19th respectively to meet Korean fans, and will start his tour in Japan.