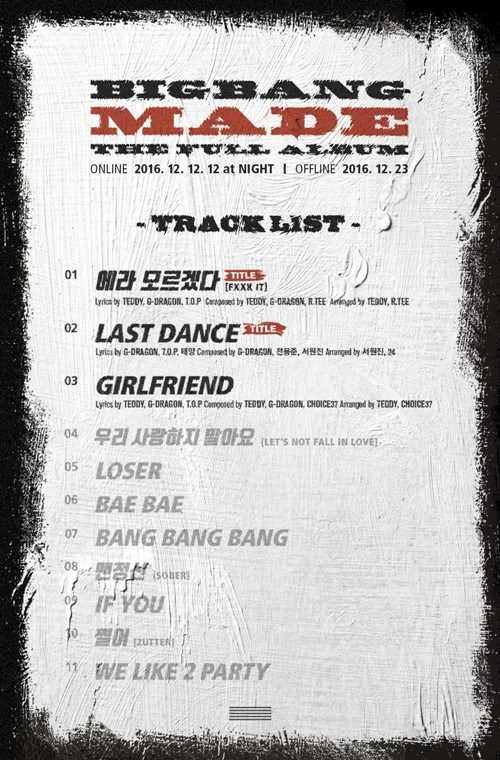 [엑스포츠뉴스=전아람 기자] The entire track list of BIGBANG’s new “MADE” album has been unveiled.

Following the title “FXXX IT” and “LAST DANCE” which are the double title tracks of the new “MADE” album, “GIRLFRIENDS”, the title of the third new song of the album, has been unveiled today.

MADE album will have three new songs, as well as eight songs including “BANG BANG BANG”, “LOSER”, “LET’S NOT FALL IN LOVE”, “BAE BAE”, “IF YOU”, “SOBER”, “ZUTTER”, and “WE LIKE 2 PARTY”, which swept No.1 on music charts for four months from August last year.

The “M.A.D.E” series that began in August last year is now being completed in the new MADE full-album, one and a half years after its beginning. Music fans in and out of the country are paying keen attention to BIGBANG’s new songs and the release of the new full-album, which is only four days ahead now.

Nobody would deny the fact that BIGBANG who celebrated the 10th anniversary of their debut this year is the top idol boy group that represents Korea. BIGBANG is the only Korean idol group who hosted world tour including North America. As such, the news of BIGBANG’s comeback is the hot issue now in many countries beyond Korea, because BIGBANG’s new release always sweeps not only domestic music charts but also many foreign music charts.

BIGBANG celebrated the 10th anniversary of their debut this year. BIGBANG’s MADE album is their first full album in eight years. As T.O.P will join the police for his mandatory military service in February next year, fans will not be able to complete team of BIGBANG for a few years from now and BIGBANG is releasing new songs for the first time in one year, fans’ anticipation for BIGBANG’s new album is rising high.

BIGBANG has been hosting Japan dome tour for the past few weeks, presenting shows every week. However, BIGBANG will concentrate on their performances in Korea from the 12 this month. Plus, the team has decided on their appearance in MBC’s “The Infinite Challenge” show and “Radio Star” show.

Not only BIGBANG fans but also music-industry insiders are showing keen interest in what sensation the new songs of BIGBANG who swept music charts for four months last year will create in the music scene of December and how it will change the trend in the music industry.