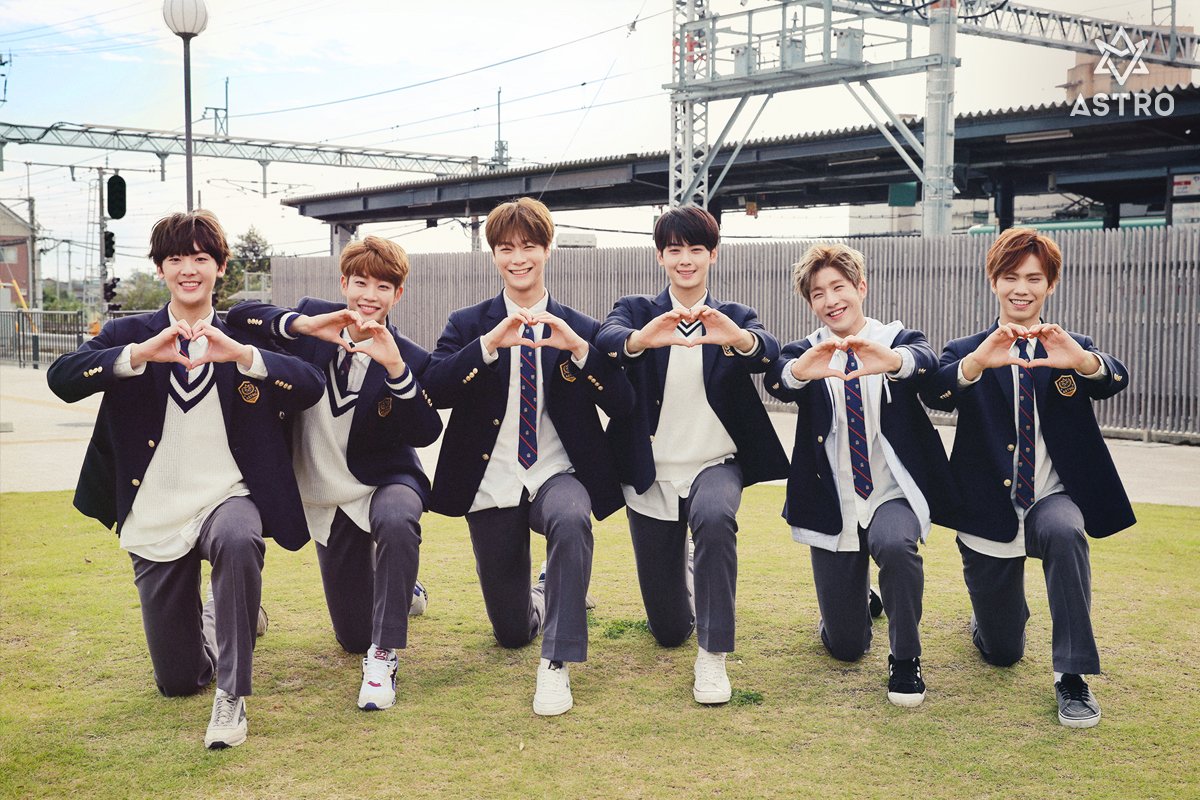 Idol group ASTRO recently sat down with a news outlet to look back on their upcoming first debut anniversary and talked about their teamwork and what kind of music they would like to pursue in the future. Although they’re a relatively new group, having made their debut last year, ASTRO had an impressive first year – they released 3 mini-albums and their title tracks “Hide & Seek,” “Breathless,” and “Confession” drew attention for their vocals and choreography.

When asked to talk about their upcoming debut anniversary, Moon Bin said, “The last year was so fun, releasing three albums, and we learned a lot. We were so happy because we were able to meet our fans. Our fourth album is coming soon and I hope we do well with that one as well. We want to get number one on a music broadcast.”

The group then thought about if there was anything that changed after their debut, and Rocky answered, “Looking at the camera. When we were trainees, we practiced with just one camera. But after we debuted, there were multiple cameras. It was really hard to find the camera to look at.”

Eun Woo brought up a slightly different angle, saying, “I learned that our senior singers are so impressive. It wasn’t just that you have to be good at dancing and singing. Our senior singers rose to the top after overcoming emotional and physical hardships. I observed the importance of mind control and really sticking together as a group.”

The topic of their debut track came up, as they were asked, “Let’s be honest here. Did you ever think that you would debut with such a cute song?”

Moon Bin revealed, “We never thought we’d debut like this when we were trainees. When we were trainees, we practiced with covers of BIGBANG and BTS. We didn’t do any soft or cute things but when our agency first said that we’re going to debut with this kind of song, we were all really surprised. It was a totally different feel. I remember that it was difficult to think of cute expressions to do.”

Rocky continued, “But I think because we’re young, our voices were able to mesh with the song well. You can’t just do a concept like this by practicing. We really made it our own. Although we did anticipate debuting with a strong image, the more time passed, I think we matched more with this image.”

When asked if there was a type of song or style that they wanted to do, Jin Jin answered, “A song where we can play as we are. Instead of a song with a lot of choreography, maybe a song where we can just have fun on the stage and be connected. I want to try a song like BIGBANG’s ‘We Like 2 Party.'” Everyone then spoke up, saying, “Will we be able to do a song like that ten years after we debut, like BIGBANG?”

The reporter then chimed in, “Maybe you can do that kind of song after you re-sign your contracts?”

The group then all burst out in the BIGBANG song, singing “Re-Signing party, yeah!”

You can catch the fun group live and in color if you live in Singapore, as they recently announced a fan meeting at Resorts World Sentosa on Sunday, March 5!