Yoo Byung Jae Talks About His “Close” Friendship With G-Dragon 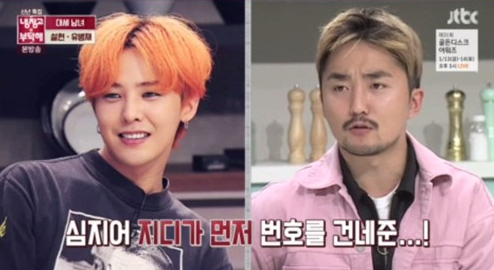 Actor Yoo Byung Jae spoke about his close friendship with BIGBANG’s G-Dragon, but it looks like there is still some room for development!

Yoo Byung Jae guested on the January 9 episode of the JTBC show “Please Take Care Of My Refrigerator.” During the broadcast, he spoke about his agency, YG Entertainment. When asked if there were any people in his agency that he was close with, he answered WINNER’s Kang Seung Yoon and SECHKIES member Lee Jae Jin. But he also acknowledged that he was not that close with most of them.

When asked if it was true that he was close with G-Dragon, he answered affirmatively. He soon, however, laughed and said that he wasn’t close to him in reality.

He said, “Actually, G-Dragon gave me his phone number first when I first signed the contract with YG, but I’ve never contacted him yet,” confessing that he had thought about texting G-Dragon several times but never got around to it.

The MCs then eagerly asked if he wanted to contact him now during the filming of the show. Yoo Byung Jae paused and said, “Before I die, I do want to use my G-Dragon card [and contact him]. I do like this show, but I don’t think this is the time to do it.”

Check out the clip here below!