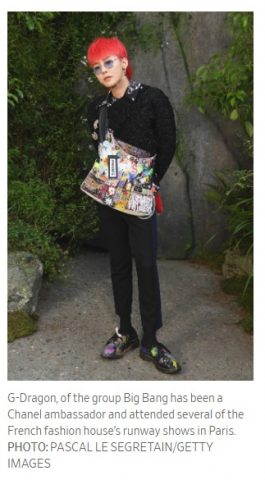 LAST MONTH IN PARIS, Korean rapper Mino appeared on the catwalk during Louis Vuitton’s spring 2020 fashion show. A member of the Korean pop (“K-Pop”) group Winner, Mino is one of the biggest celebrities of the moment. Within hours of the show, Korean pop culture websites like Soompi and Koreaboo picked up the news, as did American outlets like Vogue.com (which reported that Mino “stole the show”), E! Online and curiously, Yahoo Finance. A thread on the K-Pop Reddit forum, which boasts over 387,000 members, is dedicated to the walk. Mino’s own Instagram, followed by nearly 5 million fans, teems with comments such as “Congrats on ur [sic] successful runway debut MINO!!”

Mino’s catwalk cameo reflects fashion’s growing recognition that K-Pop “idols,” as their fans exclusively call them, are globally influential. Fashion labels are “highly aware of how visible these stars are,” said Jeff Benjamin, the K-Pop columnist for Billboard, and for the past couple of years brands have cozied up to them accordingly. In 2017, G-Dragon of the boy band BIGBANG mugged in Chanel ads and perched in the front row at its Paris fashion show. Last year Kai, of supergroup EXO, attended Gucci’s 2019 resort show. And last month Lisa of girl group Blackpink posted a photo of herself meeting Celine designer Hedi Slimane after its spring 2020 menswear show. The symbiosis goes beyond appearances: In 2017, Kris Wu, a former member of EXO, released a collaboration with Burberry; and TaeYang, also of BIGBANG, partnered with Fendi on bags, hoodies and T-shirts. At present, Dior has partnered with BTS, the most high-profile K-Pop group, to design all of its costumes on tour, while Uniqlo stores carry a line of signature BTS T-shirts.

K-pop idols are “major global influencers,” according to Yoona Park, the associate marketing director at W Concept, an 8-year-old online store that sells Korean fashion brands. When a K-Pop idol wears an item, it can sell out at lightning speed, not merely in Korea, but globally. BTS spurs particularly strong retail ripple effects: Ms. Park noted that in April, when the band wore sneakers by Korean label Andersson Bell to the BBC Music Awards, they “sold out immediately” on W Concept.

“There are definitely Instagram posts by some of these [idols] that have sold out the product in question they’re wearing or caused huge spikes for the brand in the following 24-48 hours,” confirmed Katy Lubin, the VP of communications at Lyst, an online platform that tracks fashion search results. Lyst reports that global searches for Celine’s Triomphe bag leapt 66% on June 28 after Lisa of Blackpink Instagrammed the style. And in May during the three days after Dior announced it would dress BTS on Tour, search interest in the French label jumped 420%.

Bands and record labels meticulously curate the artists’ looks. According to Billboard’s Mr. Benjamin, groups can have “half a dozen stylists” traveling with them on tour. K-Pop idols tend to embrace flashy fashions. G-Dragon (who is currently fulfilling South Korea’s mandatory military service) has been known to wear women’s clothes, particularly Chanel tweed jackets and purses, while V, a singer in BTS, recently performed in a silk Kith & Versace shirt with an exaggerated, easy-to-spot logo. In some cases, these clothes reflect paid partnerships, in others K-Pop idols with the aid of their stylists wear cutting edge fashions simply because that’s what they’re attracted to.

K-Pop’s fashion influence reflects the growth of the music itself. In 2018, BTS was the first K-Pop group to top the Billboard-200 chart with its album “Love Yourself: Tear.” This April, in the same week, it broke YouTube’s single-video daily view record with 74.6 million views and was the first K-Pop group to appear on NBC’s “Saturday Night Live.” Also in April, four-member Blackpink was the first female K-Pop group to play Coachella. And earlier this month, over 55,000 people attended KCON New York, the latest edition of a 7-year-old roving K-Pop festival held almost exclusively outside of South Korea.

Though K-Pop emerged in the late 1990s, it splashed onto the global stage in 2012 with “Gangnam Style,” South Korean singer Psy’s inescapable viral hit. That song, with its madcap music, catalyzed a westward migration of other K-Pop artists. Simultaneously, social media spread K-Pop beyond the physical borders of Korea. Today, fans from Brazil to Boston to Botswana can follow stars on Instagram, watch their videos online and share clips with fellow fans on Facebook. K-Pop is far from an exclusively Korean phenomenon.

On Instagram, stars like Mino and Sehun post photos of themselves dripping in the latest Burberry or Calvin Klein looks to their millions of followers. One Twitter account dedicated to identifying the clothes that each BTS member wears has over 341,000 followers. “People want to be involved with their idols that’s why they keep tracking their outfits,” wrote Alex Ilic, the 24-year-old student behind that account. What is more, they increasingly want to dress like their idols, whose outfits Mr. Illic said are a “free fashion guide for some people.”