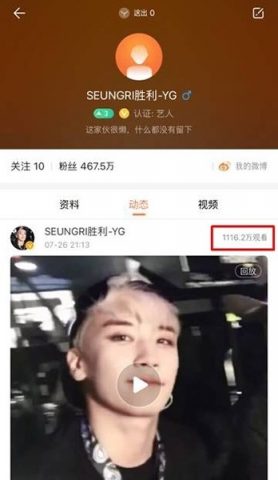 On July 26 at 9 PM (KST), SEUNGRI met the chinses fans through his live broadcast in Weibo, which is China’s largest social media platform. The simultaneous viewers reached 300 thousand in 2 minutes, and 420 thousand in 5 minutes, proving Seungri’s popularity.

Seungri displayed his fluent Chinese skills during his 1-hour live broadcast through Weibo. He not only introduced his new song, but also sang the title song ‘1, 2, 3!’ in Chinese, making the Chinese fans cheer.

He continued to communicate with the fans through games prepared with care, prior to the broadcast. Seungri learned what artists in China say to confess their feelings and made sweet comments, capturing the ears of fans.

He responded to the fans’ support by stating, “I want to meet the Chinese fans. I really want to have a concert in China”.

Seungri also put the people in awe by perfectly mocking a Chinese song he heard for the first time. The simultaneous viewers surpassed 1 million while he was taking polaroid photos to gift the fans, and Seungri appealed that he is a hot topic. 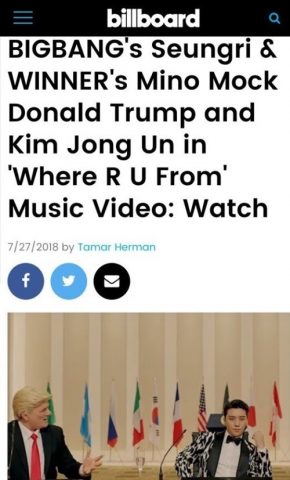 US Billboard spotlighted Seungri’s MV for ‘WHERE R U FROM’

Billboard introduced SEUNGRI’s MV by writing, ‘Seungri’s MV is an obvious political satire, among all MVs released in K-Pop’.

In fact, the MV mocked not only president Donald Trump of the United States and Kim Jong Un of North Korea, but also reenacted a scene from the movie ‘JSA’, with Mino wearing a North Korean military uniform.

Along with Seungri’s comeback, the MV for the title song ‘1, 2, 3!’ was released with his album on the 20th. However, the MV for ‘WHERE R U FROM’ was kept in veil, raising the curiosities of fans.

The MV released on the 27th starts with a global summit conference scene, while the parody of president Donald Trump of USA and Kim Jong Un of North Korea’s meeting captured the viewers’ attention. While representatives argued and raised voices during the summit, Seungri arrives in a black horse, wearing a military police uniform.

WINNER’s Mino appears after Seungri as a featuring artist, wearing a North Korean military uniform, and everyone at the scene starts dancing while the summit becomes a party.

The MV was directed by producer Park Junsoo, who directed ‘YG Electronics’. His unique B-rated emotions flooded within the MV, adding more joy.

Seungri is currently working hard on preparing for his first solo concert ‘SEUNGRI 2018 1st SOLO TOUR [THE GREAT SEUNGRI] in SEOUL x BC CARD’ which will be held through August 4~5 at 6 PM in Seoul Jangchung Gymnasium.