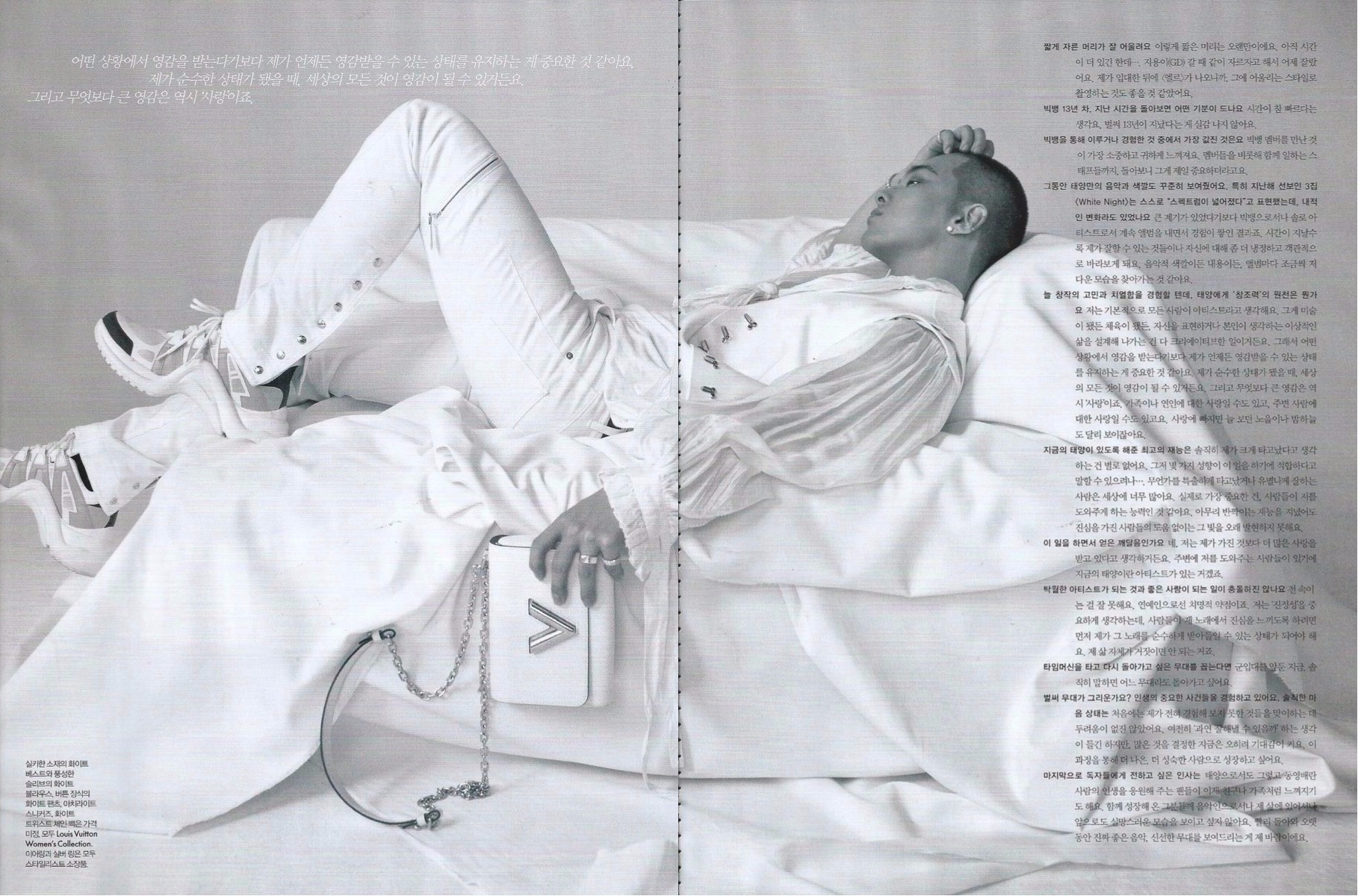 Q: Your short hair suits you.
Taeyang: It’s been a while since I’ve had hair this short. There is still time left, but… Jiyong (GD) wanted to get it cut together, so I got it cut yesterday. This issue of Elle is released after I go into military service as well, so I thought it would be nice to have a photo shoot to fit that (short-cut) style.

Q: 13 years of BIGBANG, how do you feel about it looking back?
Taeyang: I just feel like time passes by really fast. It still doesn’t feel real, the fact that 13 years has passed.

Q: What’s the most valuable thing you’ve experienced or achieved through BIGBANG?
Taeyang: Meeting the BIGBANG members feels like the most precious thing. The members, as well as the staff who worked with us, looking back, were the most imporant.

Q: Throughout this time, you’ve shown us a color and musical style that’s uniquely Taeyang. You said specifically about your 3rd album “White Night”, which you released last year, that your “spectrum has widened.” Were there some changes within you that caused this?
Taeyang: Rather than some major turning point, I think it was a result of the experiences I gained from consistently releasing albums as part of BIGBANG and as a solo artist. As time passes, I’ve started to see what I’m good at doing through a colder and more objective point of view. Whether it’s my musical color or content, I think with each album, I become closer, little by little, to creating something that displays me like I am. 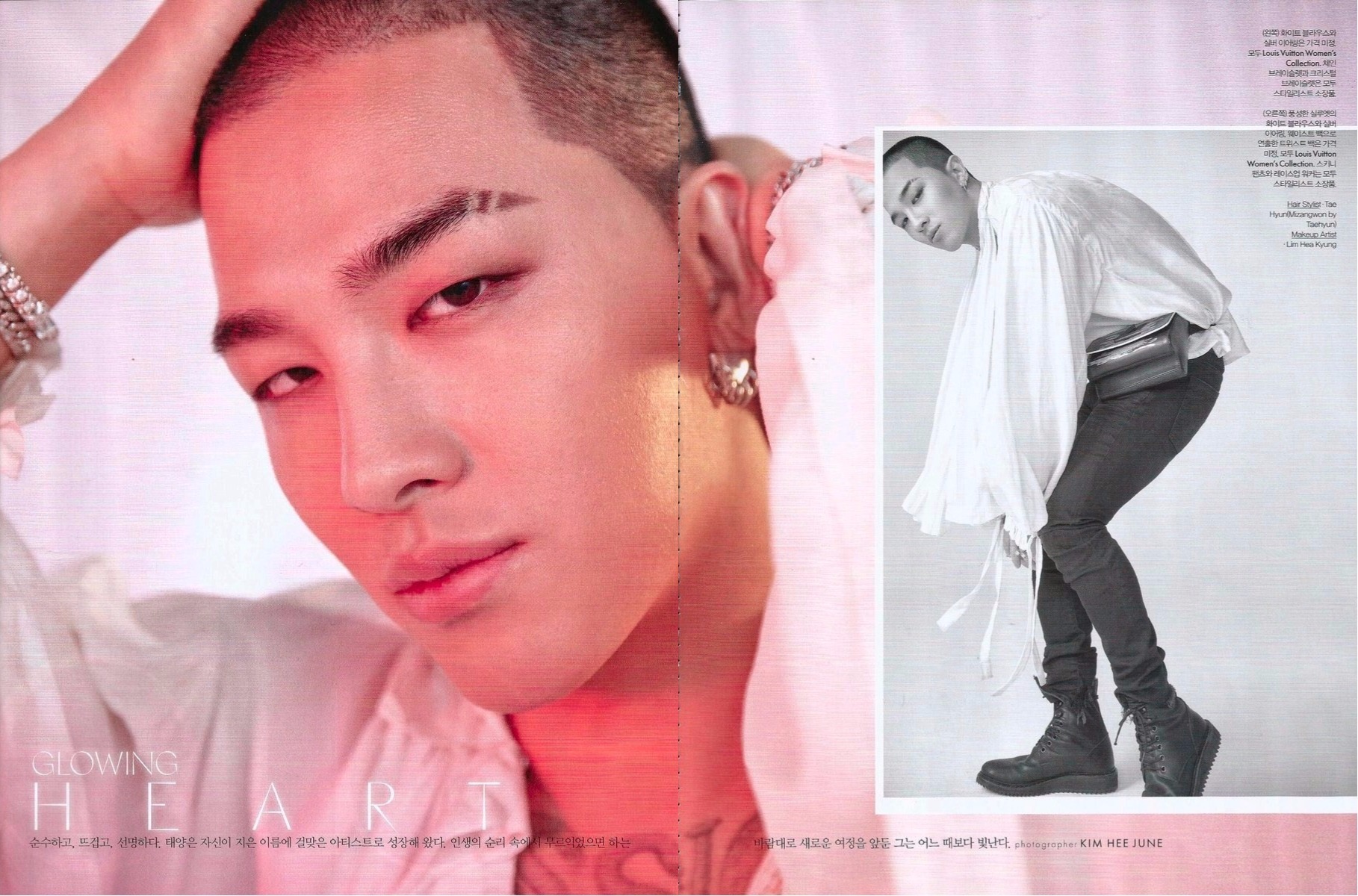 Q: What’s a significant talent (you have) that allowed the present Taeyang to be possible?
Taeyang: Honestly, there’s nothing that I can say that I’m truly significantly talented at. It would more fitting to say that I have a few traits that made me more fitting for this career path. There are so many people in this world who are born good at something and who are incredibly talented in certain aspects. I think what’s truly important is the ability to have the people around me helping me. Even if you have talent, without the help of genuine, good-hearted people, that light can’t shine for long.

Q: Is this a realization that you came to from working in your field?
Taeyang: Yes. I believe that I receive more love than what I already have. The artist Taeyang could only come into existence because there were people around me who helped me.

Q: Doesn’t being a good person and being an exemplary artist often come in conflict?
Taeyang: I’m not good at fooling people. It’s a fatal flaw as an entertainer. “Sincerity” is very important to me, and if I want people to feel how sincere I am through my music, then I also need to be in a state where I can take in the music as purely as possible. (In order to do that,) My life itself cannot be a lie.

Q: If you could go in a time machine and choose just one performance to return to?
Taeyang: Right now, when I’m so close to going into military service, I’d honestly go back to any performance.

Q: Do you already miss the stage? You are experiencing some important events in your life at this moment. Honestly, how do you feel?
Taeyang: I can’t say I wasn’t afraid to make new experiences at first. I still think “could I really do this well?”, but at this point where I’ve already made many decisions, I feel more excitement (than fear). Through this process, I want to grow to become a better and more mature person.

Q: Any last words to the readers?
Taeyang: My fans, who support and cheer for my life as Taeyang and as a person named Dong Youngbae, now really feel like my friends and family. To those people who I’ve grown with, I don’t want to disappoint them either as a musician or as person living out his life. I hope to return soon and show them good music and refreshing performances for a long time.

Credits: Thanks to @gniuslab for translating!
Scans: @l997O2ll, (Post)  - This news is a summary available on BIGBANGupdates (BBU)