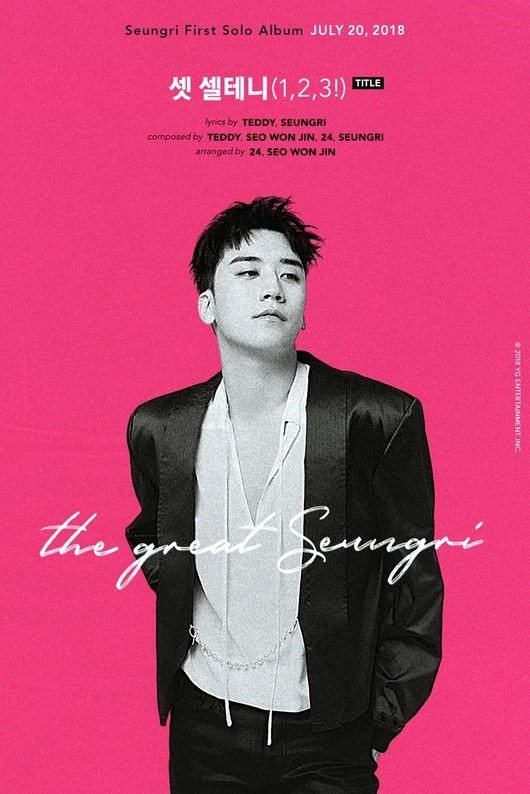 In a hot pink colored background, SEUNGRI made a chic facial expression while dressed up in a cool suit. SEUNGRI was treated in black and white, emitting a mature man’s atmosphere.

The title song ‘I’ll Count to Three (1, 2, 3!)’ was written, composed, and produced by hitmaker TEDDY, while SEUNGRI also participated in the writing and composing of the track. 24 and Seo Wonjin were also credited for the composition and arrangement of the track. Since this is the first musical collaboration between SEUNGRI and TEDDY, fans are wondering what kind of synergy effects will be brought out through the track.

SEUNGRI noticed his comeback as a solo artist in 5 years with his first official solo album ‘THE GREAT GATSBY’ on the 20th, since he last released ‘Let’s Talk About Love’ on August 2013. Not only fans in Korea, but also global fans are highly anticipating the album since it’s an opportunity to meet SEUNGRI’s unique musical charms, rather than his charms as a member of BIGBANG.

SEUNGRI displayed his passion on making solo comeback by writing, “I’m ready, and I will do it right. I won’t let my members down” on his social media. YG’s representative producer YANG HYUN SUK also raised expectations by introducing the album as a ‘legendary solo album’ and ‘5th runner from YG in 2018’.

After making his solo comeback on the 20th, SEUNGRI will meet the fans through his first-ever solo concert ‘SEUNGRI 2018 1st SOLO TOUR [THE GREAT SEUNGRI] in SEOUL x BC CARD’ from August 4~5 at 6 PM in Jangchung Arena, Seoul.