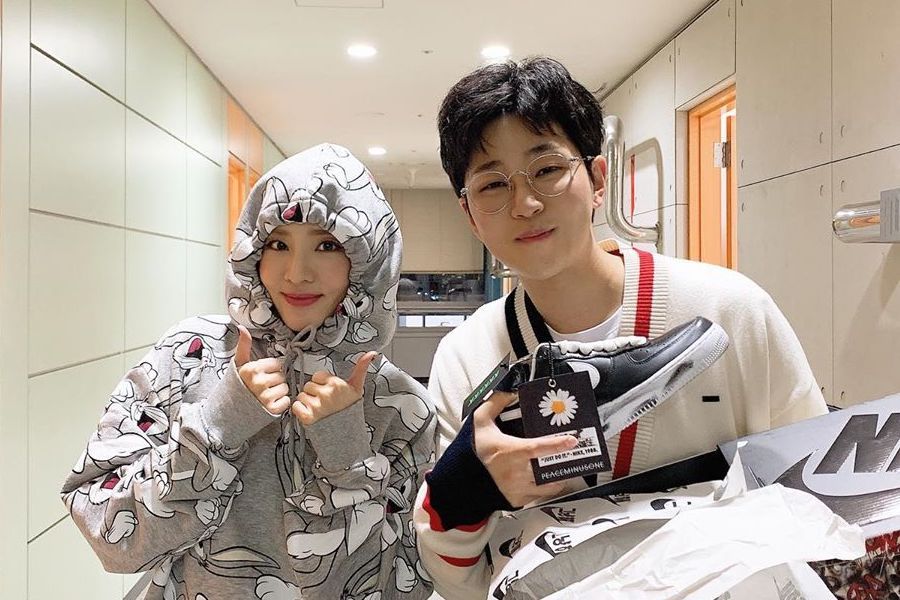 On December 12, DinDin shared photos on Instagram of shoes he received from Sandara Park. He smiles with Sandara Park in the first photo, and in the second photo, he has put the shoes on a chair as he bows down to them. The shoes in the photographs are limited edition Air Force 1 PARA-NOISE (AF1 PARA-NOISE) which is a collaboration of G-Dragon’s fashion brand PEACEMINUSONE and Nike.

DinDin has expressed his admiration for BIGBANG’s G-Dragon in the past and revealed that he’s such a big fan that his own fans gift him BIGBANG merchandise on his birthday.

DinDin wrote in the caption, “Dara suddenly asked me my foot size and gave me Ji Yong (G-Dragon’s real name)’s sneakers as a gift. She said that I need to wear these more than anyone else does. This is insane. Dara is an angel without wings. This is the biggest surprise and most moving moment of the year. My own older sisters don’t even do this. I’m certain that Dara is an angel. I love you. Sandara Park is the best. I can’t calm down.”

He added more praise for her in hashtags including “princess,” “fairy,” “prettiest in the world,” and promised to support her his whole life.

Sandara Park commented, “I did what the entire nation was hoping for!” and DinDin replied, “You’re the best. I’m going to make wings for Dara.”

Sandara Park previously attended G-Dragon’s private fashion event where he held a “Live Art Performance” for the sneaker launch. She showed support for his collaboration and thanked him for gifting her the sneakers in a sweet post.

Check out the latest episode now!