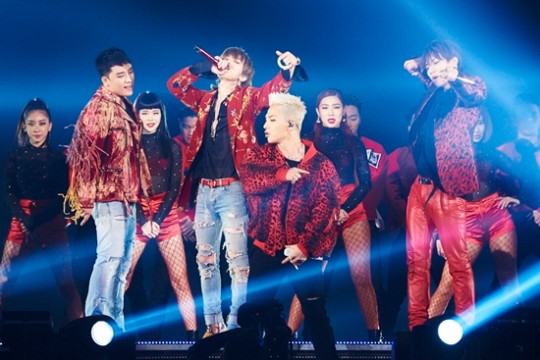 [엑스포츠뉴스=전아람 기자] Group BIGBANG raised tension of a night in Tokyo. BIGBANG successfully completed their 3-time concert in Japan’s Tokyo Dome on December 13. BIGBANG, who previously filled the Tokyo Dome with their unique and strong energy on December 6 and 7, held another concert on December 13. They performed the song ‘GIRLFRIEND’ which was one of the tracks listed on their 3rd official album, ‘MADE THE FULL ALBUM’, making the audience go wild. ‘GIRLFRIEND’ is a song that displays BIGBANG’s unique hip-hop mood, and the performance was a special gift for the fans since it was the first time the song was performed live in Japan.The day was more meaningful as a special fan meeting also took place along with the concert. It was an event to express their gratitude for the fans that have been supporting BIGBANG from Japan, and the idea came from the members that wanted to communicate with the fans at a closer range. The meeting took place at a moving stage, where fans can watch a hilarious talk corner and live performances at a close range. The members also prepared a surprise birthday party in the middle of the event for SEUNGRI who’s birthday was on the 12th, displaying their loyal friendship. Meanwhile, BIGBANG is planning to hold ‘BIGBANG JAPAN DOME TOUR 2017 ‘LAST DANCE’’, gathering 696,000 audiences during 14 concerts in 4 cities.Also, on the same day, G-DRAGON’s solo mini album, ‘KWON JI YONG’ was released in Japan. ‘KWON JI YONG’ is a solo album released by G-DRAGON in Korea. It was released in June, and was an album released in Korea by G-DRAGON in 4 years. The album took the iTunes no. 1 spot in 45 different countries, setting a record for Korean solo artists for no. 1 in greatest number of countries, proving his global influence. Along with G-DRAGON, solo albums by other members are getting prepared for releases in Japan. On the 20th, DAESUNG’s solo mini album, ‘D-LITE 2’ will be released, and TAEYANG’s solo album, ‘WHITE NIGHT’ will be released next year on January 10. BIGBANG will continue their tour from December 21 to 24 in Osaka’s Kyocera Dome. On the 30th and 31st, they will hold a finale for ‘LAST DANCE’ in Seoul Gocheok Sky Dome. 2017. 12. 14.