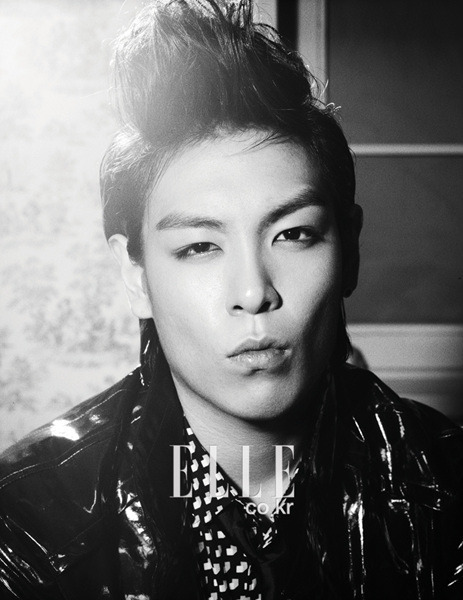 Click on any of the images to see an enlarged version.

“How about I mess up my hair for this cut?” “Is my face appropriate for the image?

Should I force it a bit more?” “Would it be okay to put on this watch or this ring for this clothing?”

TOP continuously put in his ideas for the photoshoot. He checked his attires, and monitored test-cuts closely. It’s been a year since TOP last posed for . His face and body line was stronger and sharper than before. He was smiling more and talking more this time. It seemed as if it were a time for change for TOP. He is filming for KBS drama , and there are talks about his solo album.

“It’s my first time shooting for a magazine by myself apart from BIGBANG; except when I was posing for merchandises. I always saved a lot of new sides of me. Actually, I couldn’t really be in front of camera all the time. I have this thought that I need to show new sides of me to people. I want to surprise people. There is a reason why I always agonize before photoshoots. I am strict to myself.”

TOP shrugged his shoulders and continued, “That desire to be different often burdens me. People often talk about how much effort and time they spend on something. I want to show only with results.”

TOP is preparing himself continuously. He has an opportunity to show people with his “results” soon. First of all, it would be , to be a aired in October.
“The filming in Korea just began. I used to like slim-style clothing, so I tried to lose some weight to fit myself to the clothings I liked. However, when I thought about my character, “Vick”, I thought otherwise. I wanted to show more healthier side of me for the character. I really hated exercising, but it has been already a year since I started.”

Surprisingly, TOP already had the side of “Vick”.

“The CEO of drama producing company told me this. At the BIGBANG Concert, , I performed my solo, “???? ?? ?- Pretending to be Unconcerned”. I was wearing my suit, prepared my own path on the stage, and performed my hardest. He ws there, and he liked my eyes and gaze on the stage. Maybe that appealed to the staffs.”

How do you prepare yourself for acting, apart from the exterior image?
“When we have a meeting, we usually talk about our characters. Because I am the youngest among the group, I do not start up a discussion myself. But, I always think a lot inside. Vick isn’t an ordinary assassin.”

Isn’t it hard working along side with famous and well-established actors and actresses such as Lee Byung Hun, Kim Seung Woo, Kim So Yeon and Kim Tae Hee?
“Due to my nature, I cannot approach people well, nor can be around new people, especially with elders. I was worried at first, but they took care of me (since he’s the youngest), and occasionally invite me to be with them. I talk to Lee Byung Hun often.”

Looking at his sparkling eyes, it may be possible to see him more often on TV as an actor. Two years ago, in , TOP was decent.

“It was a very attractive feeling, that I can store my image of that age in a film. It was also refreshing to think and challenge myself to something other than music. Now, I am not doing it only because it is fun.

Did I get more serious into acting? If I think that way, it’s rather because of my desire to be perfect.

I want to portray myself well for the younger members of BIGBANG. Many people asked me before, but my main ground is music. I have no intension of chaniging it to acting. If people want me to act, I will probably do it. But if people don’t want it, it doesn’t matter to me if I don’t do it.”

Maybe it wasn’t TOP’s intention in the first place. Although he thought only about music for 10 years, he became a multi-player in Korean entertainment industry. He has emceed, performed on stage and also acted. “The difference between each of them? I don’t know. I just throw myself every day for the given situation. When on stage, I don’t think I am Choi Seung Hyun, but TOP. Same with other things. No matter what I do, I just picture myself to the roles given.”

Other than “Vick” of , it must be your solo album in mind. “I have started working on it. Ideas for it just come and go randomly. When I had a couple glasses of alcohol, when listening to quiet music… I take a memo of those thoughts.”

Alcohol? Although one cannot match the image of an idol to alcohol, thinking of it, TOP is of age.

“Of course I get drunk sometimes. I am also a human-being… I like wine. I drink with my friends or can drink alone at home. My limit is one bottle for whiskey, and three to four bottles for wine. I get quiet and be emotional when I am drunk.”

“I have an interesting story to tell. Many people call me for being strong and charismatic, being ‘manly’. However, Lee Byung Hun said ‘you are so feminine in your thoughts’.”

Isn’t a man’s feminine side for people who are creative and innovative? Apart from music, TOP has an authentic taste in other sides of art.

“But I am not saying that I will be writing or making something… At least not now. If I were to put out anything creative, it will be when I will be old as a grandpa. Although my solo album is my priority, I do not want to rush it. I will release it when I am most satisfied with it. When I am okay with it, and give permission for it.”

TOP is definitely a perfectionist. But aren’t you lonely when slumps hit him?

“I often meditate in my room. Two years ago, my grand father, who was a writer passed away. His last words, “Strengthen your mind with meditation” definitely made me strong. In his (grandfather’s) phrase, words such as “when tired” or “when hard” are omitted.”

In TOP, who always thinks and prepares, what would be your vision in future?
“I do not look too far ahead in future. I used to draw my vision inside. I think it is worthless doing so now. But I try not to let my time go astray. I think about tomorrow, the tomorrow that comes after today. I think it’s because I have more desire for everything.”

The time already strikes 1:40 in the morning. TOP left after changing into his clothings (well-fitted suit matched with bold accessories and shoes), and looking every staff in the eye.

Last three images: B-Cuts from the Shoot via Copu. These were only released in late 2013.