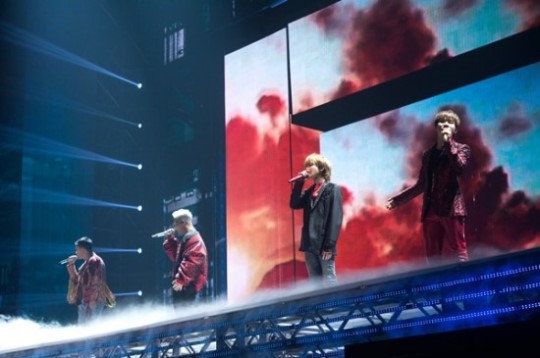 SEUNGRI stated, “The tour that felt like would go on forever ends here tonight. Thank you for coming to the concert on a special New Year’s Eve. I can’t believe we have to say goodbye after a couple songs later. My heart is off the charts as I ask myself if this is really the last”.

DAESUNG stated, “I had a lot of fun while performing. I tried to capture everything with my eyes. Thank you for filling up the stadium”. He continued, “This year’s concert will be the last before joining the army. I don’t think it’s sad, but I feel gifted with memories from all of you. I feel more grateful than sad, thinking we were able to perform for our last 10 years. I would like to express my gratitude”.

TAEYANG stated, “Time really flew by today and yesterday during the concert. I watched the debut showcase videos recently. Once again, I felt that time flies”. He continued, “I realized once again how special our fans are. Thanks to your love and support, we were able to create music and perform all over the world. And thanks to you, I spent a busy year and finished my solo tour. I actually felt physically strenuous preparing for the BIGBANG concert right after my solo tour. But I worked hard, looking forward to the day to meet the fans. As you already know, we won’t be able to meet for some time. I have mixed feelings that I can’t explain with words. Please wait for us until all five of us return better than ever”, gathering attention from the audience.

G-DRAGON stated, “The title of this concert and the tour, ‘LAST DANCE’, doesn’t mean a lot to me. I’m certain it’s not the last. I hope you feel the same way. As we always have, if you just stay where you are, we will depart for only a while. It’s just time to reorganize until the day we meet again, new and improved”.

BIGBANG, who worked tirelessly for 11 years since their debut in 2006 as a global K-Pop group, will depart with the fans for a while after this concert due to their upcoming military duty.