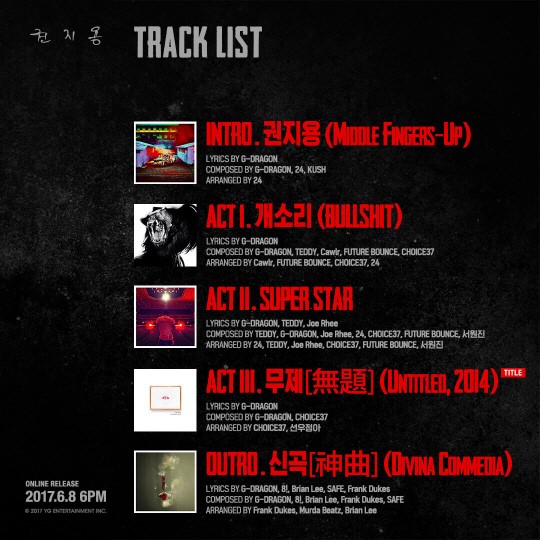 [스포츠조선=박영웅 기자] G-DRAGON has kicked off his solo comeback project in earnest, releasing the track list of his new album.

The track list includes five songs: intro track “MIDDLE FINGERS-UP”, “BULLSHIT”, “SUPER STAR”, “UNTITLED”, and “DIVINA COMMEDIA”. Title track “UNTITLED” is a slow song with an impressive piano melody, in which the feelings of missing past love is expressed in a sentimental mood. As the title of the album is G-DRAGON’s real name, he has done his very best for not only the music but also all the work for the new album, according to insiders.

G-DRAGON will also host a solo world tour. He kicks off world tour “ACT III, M.O.T.T.E” along with the release of the new album, to meet fans around the world. The tour will begin on June 10 at Sang-am World Cup Stadium in Seoul and then continue in 19 cities including Macao, Singapore, Bangkok, eight cities in North America, four cities in Oceania, and Fukuoka, Osaka, and Tokyo in Japan.

“KWON JI YONG”, G-DRAGON’s first solo album in four years, will be released today (June 8) at 6PM with the music video of its title track “UNTITLED”.