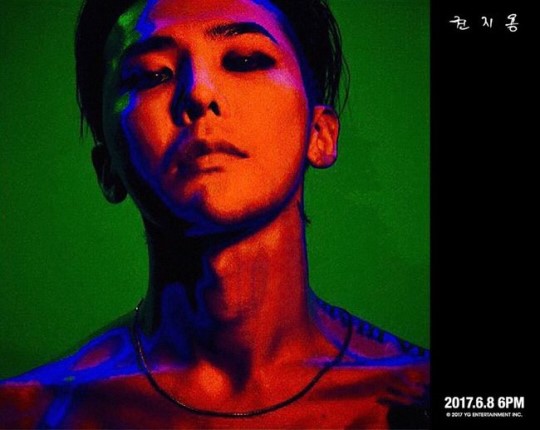 [OSEN=최나영 기자] Group BIGBANG’s G-DRAGON is coming back as a solo artist for the first time in four years.

G-DRAGON has confirmed the schedule for his comeback on June 8.

On May 31, YG Entertainment announced G-DRAGON’s new album release on June 8 at 6PM by releasing a teaser image on the company’s official blog (www.yg-life.com).

Before the official announcement, YG’s head producer YANG HYUN SUK said G-DRAGON’s comeback was “quite imminent”, posting a photo of G-DRAGON working on the mixing for his new album on his social media account. As suggested by YANG, the schedule of G-DRAGON’s comeback has now been confirmed, within one day of the release of the photo.

The teaser image shows a fascinating portrait of G-DRAGON and artwork. G-DRAGON’s real name “Gwon Jiyong” is hand-written on it.

Since his debut as BIGBANG in 2006, G-DRAGON has always presented shocking and bold music and style, so music fans expect that he will come back with an unpredictable music and style this time as well.

With his first solo album “HEARTBREAK” released in 2009 and then “ONE OF A KIND” released in 2012 and “COUP D’ETAT” in 2013, G-DRAGON has always presented a unique style of his own, which was different from the BIGBANG style. Therefore, G-DRAGON’s first new solo album in four years to be released in this June is drawing greater attention than ever before.

During this year, G-DRAGON will display his unique identity to music fans around the world by releasing the new album and hosting world tour “ACT III, M.O.T.T.E”. The tour will be kicked off on June 10 at Sang-am World Cup Staidum in Seoul and then continue in three cities in Asia (Macao, Singapore, and Bangkok), eight cities in North America (Seattle, San Jose, Los Angeles, Houston, Chicago, Miami, New York, and Toronto), four cities in Oceania (Sydney, Brisbane, Melbourne, and Oakland), and three cities in Japan (Fukuoka, Osaka, and Tokyo). The tour is held in total 19 cities around the world and more cities will be added in the list.