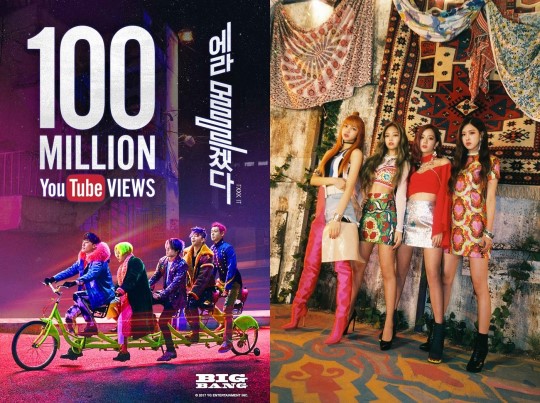 “FXXK IT” is the title song of BIGBANG third regular album “MADE THE FULL ALBUM”, which was released in December last year. As of 23:00 on July 2, the music video of the song reached 100,007,821 views on YouTube. This means that the music video only took six months to surpass the 100 million view mark. YG uploaded a poster congratulating this great achievement on its official blog.

Drawing upon YG musicians’ global popularity, YG has plans for a number of overseas tours this year. BIGBANG’s leader G-DRAGON released his solo album “KWON JI YONG” in May and is currently on a solo world tour titled “ACT III, M.O.T.T.E”. BIGBANG’s lead vocal TAEYANG is getting ready to release his solo album and will also go on his first stadium tour in July and August in Japan.

BLACKPINK is focusing on promoting its new album by appearing in music shows, variety shows, and radio programs. On July 2, the group is to hold its first signing event and meet their fans face-to-face.