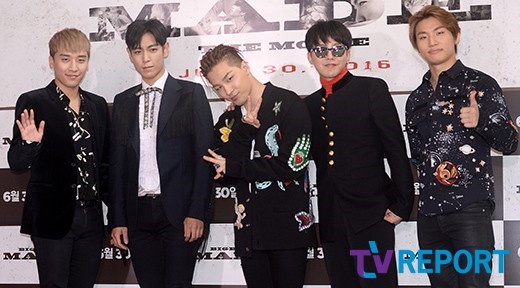 According to reporting by Japanese media outlets including Sponichi on November 18, the judge panel of this year’s Japan Record Awards announced the winners of different segments of the awards on the day before, in Tokyo. The panel announced that BIGBANG was selected as the winner of special prize, along with RADWIMPS and THE YELLOW MONKEY.

In 2009, BIGBANG received the rookie award and best rookie award, and in 2010, best artwork award, from Japan Record Awards.

In Japan Record Awards, Japan songwriter’s association presents prizes to singers, groups, and albums that recorded outstanding achievements for every year. For this year’s best album prize, “Fantome” which is a new album released by Japan’s leading R&B singer Utada Hikaru after eight years of hiatus was selected.

For this year’s special attention prize, Japanese comedian-cum-DJ PICO TARO’s “PPAP (Pen Pineapple Apple Pen)” was selected. The awards will be live-broadcasted on TBS on December 30.

In the meantime, BIGBANG has recently been carrying out Japan dome tour concert “BIGBANG10 THE CONCERT : 0.TO.10 -THE FINAL-“ that began in Tokyo Dome on the 5 this month and continues in Osaka, Fukuoka, and Nagoya.