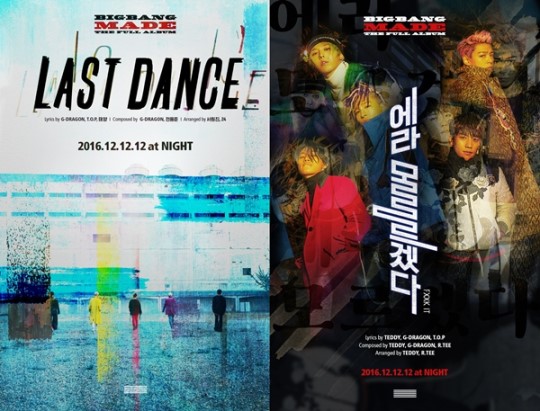 [일간스포츠=이미현 기자] It has been 2,959 days, as many as eight years. BIGBANG, the legendary idol group, is coming back with a new full album on December 12.

On December 7, BIGBANG unveiled the titles of all the double title tracks of their “MADE” album to be released on December 12 at midnight, on YG Entertainment (“YG”)’s official blog.

Along with “FXXX IT” whose title was unveiled a day before, the “LAST DANCE” is the title track for BIGBANG’s new full album. BIGBANG will perform those two songs in TV music shows and end-of-year music awards.

“FXXX IT”, one of the double title tracks, has cheerful lyrics just as the title suggests. It is a hip-hop song with groovy medium tempo. “LAST DANCE” is an impressive R&B slow song, which might be a slow R&B song that would represent BIGBANG.

There is a reason why BIGBANG is releasing multiple new songs, which is because T.O.P is to join the police for his mandatory military service, in next February. BIGBANG members well understand how much fans are sorry that they cannot complete team of BIGBANG for some while. To reward fans’ great support, BIGBANG is releasing more new songs than expected.

Notably, BIGBANG will appear in TV more than ever. BIGBANG has already confirmed their appearance in MBC’s “The Infinite Challenge” and “Radio Star” show. Plus, BIGBANG will also perform in SBS “GAYO-DAEJEON” to be held on the 26 this month.

An YG insider said, “T.O.P will join the police for his mandatory military service in next February, so fans would be feeling very much sorry that they will not be able to complete team of BIGBANG for some while. But I hope the quality new songs to be released in BIGBANG’s new album would give comfort for BIGBANG fans”.

BIGBANG fans are already acclaiming for BIGBANG. Fans are saying, “Just the titles suggest that the songs will be great”, “I’m so much looking forward to BIGBANG R&B”, etc.

On December 12 in the afternoon, right before the release of BIGBANG’s new album, BIGBANG will host live-broadcasting on NAVER V-APP. Music fans are paying keen attention to what BIGBANG’s new songs will be like and what legendary performances they will present.