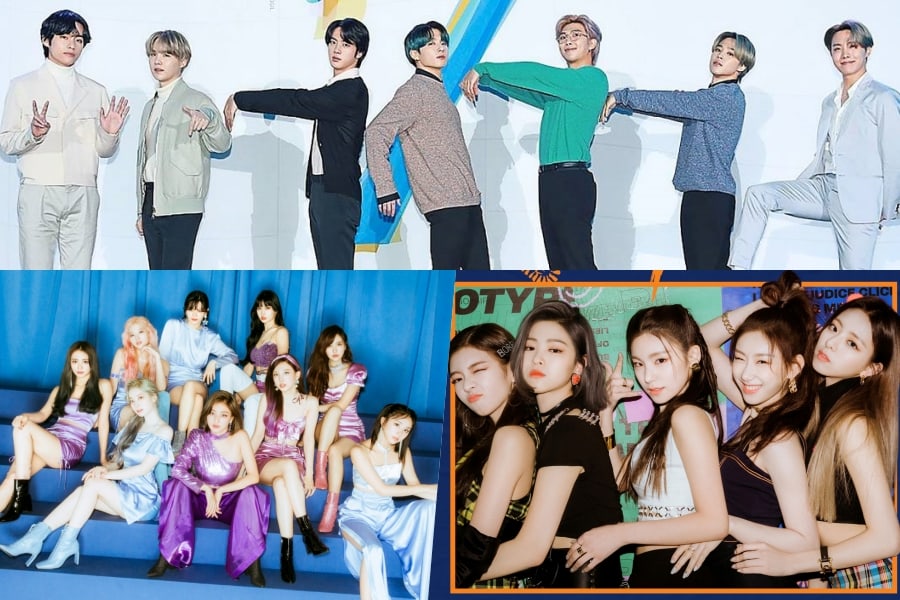 Korean entertainment agencies chimed in to talk about where K-pop is right now!

To mark the 30th anniversary of its founding, Sports Chosun conducted a survey to select the most influential people in five different categories.

Concerning the top boy groups, BTS took the first spot with 94 points. About 90 percent (18) of the participating officials chose BTS as the best boy group. BTS achieved records that no other Korean artist did before, and their recent album “Map of the Soul: 7” and swept the world’s major music charts, including the U.S. Billboard, British Official, and Japanese Oricon. In particular, BTS has entered Billboard 200, the Billboard’s main album chart for four consecutive albums, including “Love Yourself: Answer,” “Love Yourself: Tear,” “Map of the Soul: Persona,” and “Map of the Soul: 7.” In all of the world’s music history, the group showed its ability to enter four albums in the shortest time since the Beatles.

As such, officials highly rated BTS’s milestone. One official said, “Even now when they’re moving beyond Korea to the top of the world, BTS is constantly thinking about music, performance, and tour. When I m practicing, their passion makes me wonder if they are a rookie group. Their constant effort, unwavering courteousness from debut until now, and self-management without a single major accident seems to help them maintain their current popularity.”

EXO took second place with 52 points. One official noted, “EXO is a nine-year-old group. The fact that such a group is united without a single major accident in itself supports how well they manage themselves and how good their characters are.”

Here are the rest of the rankings for best boy groups below:

As for the best girl groups, TWICE came in first with 83 points. They came out on top with various hit songs, such as “Cheer Up,” “TT,” and “Feel So Good.” They were also considered for their popularity abroad. TWICE proved themselves to be the best K-pop girl group last year by successfully wrapping up their Japan dome tour, and they also won three gold medals at Japan’s Gold Disc Awards. Recently, JYP has signed an agreement with U.S. Republic Records and declared that it will speed up its world-wide move, raising further expectations.

Second place went to Red Velvet with 45 points. They gained immense popularity with their unique music and concept. One official said, “Red Velvet’s concept is something very new that no girl group has ever shown. That’s why I thinki fans always look forward to what kind of music and concept they’ll show for each comeback.”

BLACKPINK was ranked third with 40 points. Their songs “BOOMBAYA,” “Whistle,” and “Playing with Fire” achieved great success on music charts as well as YouTube. An official said, “When BLACKPINK debuted for the first time, there were some people who liked and disliked them as some had dubbed them as the ‘visually upgraded 2NE1.’ However, as time went by, they proved that not only their looks but also their skills and individuality were outstanding.”

Here are the rest of the rankings for best girl groups below:

IU was voted as the best solo artist with 74 points. Starting with “Good Day,” all of her songs have swept the music charts. One official commented, “IU is doing well in various genres of the music field. Not only does she have a solid fandom, but she is also an artist with a wide range of popularity, and she has maintained the top position in all aspects, including her ability to compose, sing, and make headlines.”

Second place went to Girls’ Generation’s Taeyeon with 57 points. Taeyeon has been successful with her solo activities, and her second album “Purpose” and the repackage album topped music charts. An official pointed out her greatest point is that she is a vocalist with outstanding singing ability who can pull off various concepts.

With 42 points, Chungha came in third. She started off in “Produce 101” and participated in I.O.I. until she started her successful solo career. One official said she shows her presence as a solo artist with strong performance and vocal skills.

Here is the complete ranking of the top solo artists:

Concerning the best rookies, ITZY landed in first place with 56 points. The girl group became a hot topic with their debut in February 2019 with “DALLA DALLA.” An official remarked, “There are many girl groups that stand out, and among them, ITZY is a group where each member stands out, and they draw attention to what concept they will impress the public with next.”

With 43 points, TXT took second place. From Big Hit Entertainment, they received a lot of interest for being labelmates with BTS. One official pointed out they are rising stars who are dubbed ‘the second BTS’ who stole the spotlight with their unique concepts and skills.

ATEEZ was ranked third with 30 points. ATEEZ is a team that is building its own musical color with its soulful choreography and free-spirited concept. They are also expanding their scope by being recognized for their powerful performances, and they even showed tremendous growth by hosting a world tour with more than 10,000 seats in just over two years since their debut.

Here is the ranking list for top rookie groups:

The fifth and final category that was on the survey was for the top producers. First place went to Big Hit’s Bang Shi Hyuk who earned a total of 71 points. BTS was also chosen as one of the top producers with 19 points, making Big Hit a power house for productions. One official explained Bang Shi Hyuk deserves to be No. 1 because he was a pioneer who was able to recognize and capture the value of BTS and Pdogg. They said Big Hit also has great business capabilities. The company not only increased its size by conducting mergers and acquisitions with Source Music and other companies, but also built a solid loyalty by creating a dedicated platform to provide the same services to global fandom at the same time.

SM’s Lee Soo Man took second place with 29 points. He is a veteran producer who helped raise various idols, such as SHINee, EXO, NCT, BoA, and more, to stardom. An official said, “It is amazing that he gave success to girl groups and boy groups with various concepts within the genre of ‘SMP.’ It was also Lee Soo Man who pioneered the Japanese market and created the first generation of the Hallyu culture by conducting aggressive overseas marketing with BoA and TVXQ. We cannot discuss K-pop and idols without Lee Soo Man.”

Park Jin Young was ranked third with 21 points for producing songs for JYP idols, such as Wonder Girls, Miss A, TWICE, ITZY, 2PM, and 2AM, as well as himself. One official shared, “Park Jin Young is a producer who works on the basis of genius. Even if there have been many issues recently, expectations for Park’s music and the groups he presents remain high.”

Here is the full ranking list of the best producers below: