G-DRAGON in No.1 on iTunes charts of 39 countries around the world… An unprecedented record 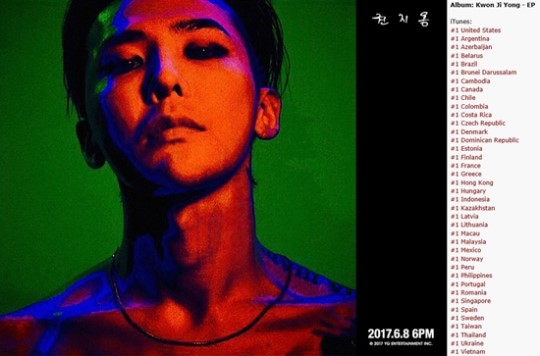 That is an unprecedented record ever set by a Korean artist, which proves G-DRAGON’s unrivalled influence in the global music scene going beyond Asia. In Japan, G-DRAGON’s new songs will be released on one after another music-streaming websites, after its release on iTunes at 0 o’clock today.

That is not all. The success of G-DRAGON’s new album is also proven on YouTube, the most objective benchmark of an artist’s popularity and recognition overseas. Title track “UNTITLED” is enjoying an explosive popularity on YouTube, surpassing 4,078,661 views within 14 hours of release.

As of the same day at 8AM, “UNTITLED”, the title track of G-DRAGON’s new album, took No.1 on the real-time charts of eight music streaming websites in Korea including the biggest one Melon, Mnet, NAVER Music, Olleh, Monkey 3, Bugs, Genie, and Soribada. Notably, G-DRAGON surpassed the traceable range of the amount of streaming for as many as nine times on the chart of Melon, boasting his formidable influence on charts.

G-DRAGON will meet fans around by world by hosting his solo world tour “ACT III, M.O.T.T.E” that will start on June 10 at Sang-am World Cup Stadium in Seoul. Other cities will be added to the list of the cities where G-DRAGON’s solo tour will be hosted later on.