G-DRAGON has entertained 260,000 people in his Japan dome tour… SEUNGRI helped as a surprise guest 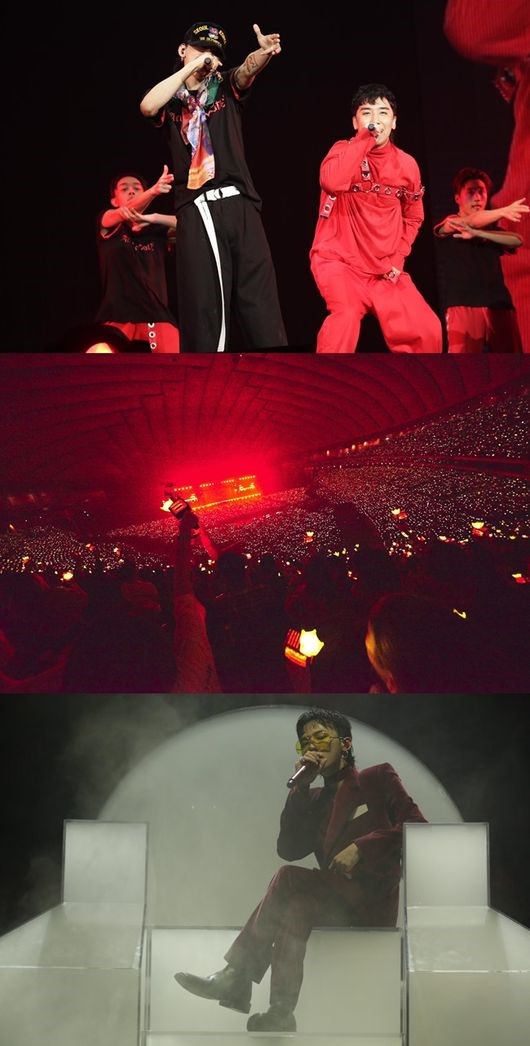 G-DRAGON has been hosting world tour “ACT III, M.O.T.T.E” in 29 cities around the world. On September 19 and 20, G-DRAGON stood on the stage of the Dome of Tokyo, the last city of his Japan dome tour, to spend some time with fans.

When the show began with “HEARTBREAKER”, the title track of G-DRAGON’s first solo album, the atmosphere at the Tokyo Dome filled with audience was heated up.

Then, G-DRAGON presented the performances of his mega-hit songs including “ONE OF A KIND”, “WHO YOU?”, and “CRAYON”, as well as the songs included in his solo album “KWON JI YONG” released in June this year.

G-DRAGON expressed his gratitude for fans by saying, “I wanted to talk about an ordinary person Kwon Ji-yong, not G-DRAGON, in this album. It was very hard honestly and I was really worried. However, when I’m singing in front of you on the stage, such worries just disappear and my heart is filled with happiness. This time for me to meet you and be with you on the stage is really precious and meaningful for me. I’m really grateful to you for allowing me to have this good time”.

In an encore performance of the show, BIGBANG’s SEUNGRI appeared on the stage as a surprise guest. SEUNGRI said “Mr. G-DRAGON, congratulations on the last day of your dome tour!” and performed with G-DRAGON. The two made fancy encore performances by singing “CROOKED”, “BAE BAE”, “BANG BANG BANG”, “GOOD BOY”, and “FANTASTIC BABY” together.

With SEUNGRI’s support, G-DRAGON’s Tokyo Dome concert was wrapped up in a great success.

G-DRAGON’s Tokyo Dome tour that ended on the day has entertained total 260,000 fans in five shows held in three cities in Japan. Now, G-DRAGON kicks off his Europe tour beginning from a show in Birmingham on September 23.

G-DRAGON will release the Japanese version of his solo album “KWON JI YONG” in Japan on November 1. Then, from November, G-DRAGON will host “BIGBANG JAPAN DOME TOUR 2017 –LAST DANCE-“ with the other BIGBANG members. That will make BIGBANG the first foreign artist who has hosted dome tour in Japan for five years in a row. The tour will give total 13 shows in four cities including Fukuoka, Nagoya, Osaka, and Tokyo, to entertain 646,000 fans.