Thank you for the translation: @xxxibeunjn,
Scans by URTHESUN (also visit: [Photos] More photos of Taeyang in GRAZIA magazine June 2015)

Q. You posted a video of the Chanel collection finale on Instagram.
Taeyang: It was a lot of fun. Not only was the show in Seoul, the Korean traditional clothes and hair were impressive. I had fun watching the interpretation of Korean traditional concepts by Chanel.

Q. You sound proud.
Taeyang: I am. I don’t know for sure, but I think it’s right to say that I’m proud. The fact that a show like that happened in Korea, and that Korean model Soo Joo was part of the finale, makes me proud. I was proud of myself for being a Korean that day.

Q. Were there any items or stylings that you wanted to have?
Taeyang: I wanted everything there. Even women’s clothes. You know, I like women’s clothes (laughs). There’s too many to choose from. But if I had to choose one, I would say the huge Camellia that was hung up on the hallway connecting the show hall and the VIP lounge.

Q. You liked the Camellia decoration?
Taeyang: Yes. I wanted to have it (laughs). I wanted to take it home but my stylist stopped me. But I heard that other people took it after the show.

Q. What were you gonna do with it?
Taeyang: Put it up on my wall at my house. 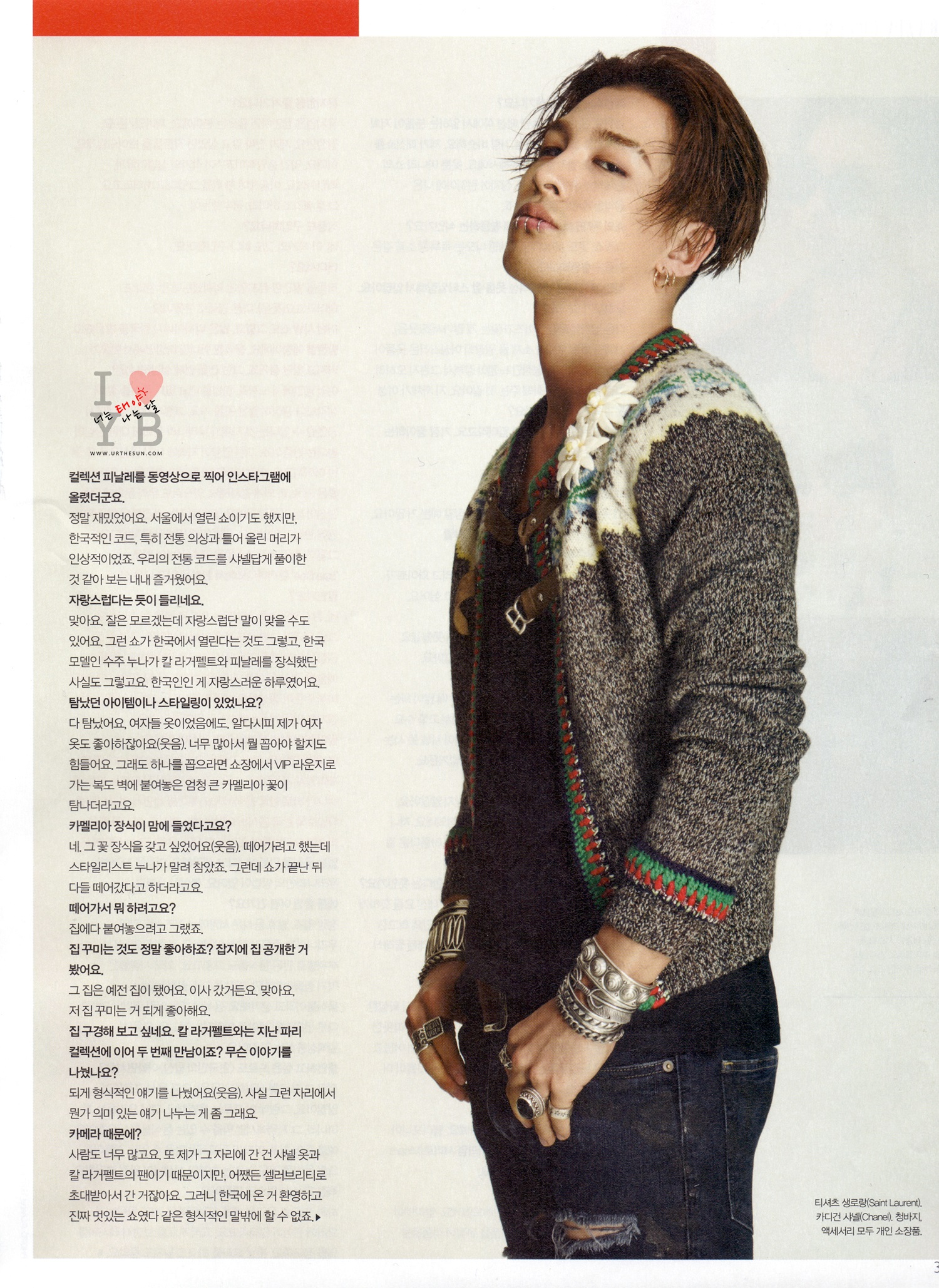 Q. I would like to take a look at your place. It’s your second time meeting Karl Lagerfeld. What did you guys talk about?
Taeyang: We had a very formal talk (laughs). To be honest, it’s difficult to have a meaningful conversation in a place like that.

Q. Because of the cameras?
Taeyang: Also because there are too many people. I am a fan of Chanel and Karl Lagerfeld, but I was invited as a celebrity to be there. So all I can say is formal things like ‘Welcome to Korea’ and ‘It was a great show.’

Q. How much do you enjoy fashion shows?
Taeyang: A lot. Um… For example, it’s like people working in the fashion industry coming to our concerts for inspiration. I go to fashion shows to get inspired. I get inspired not only from clothes, but also from the general concept of the show and the music that was played during the runway.

Q. Is it like using the items from the show during your concerts?
Taeyang: Yes. Not only clothes but also unique items used during the show.

Q. We talked about this earlier, but you do style and wear women’s clothes. Do you have your own ‘know-how’ of doing that?
Taeyang: That’s because compared to other men, I can fit into more women’s clothes. There are lots of clothes from Chanel that are made up of feminine patterns or materials. Because there’s a strong masculine feel to me, I think those clothes neutralize me. Should I say that I go well with feminine clothing?

Q. You enjoy wearing a tweed jacket from Chanel. What’s your favourite item?
Taeyang: A winter coat from Chanel. 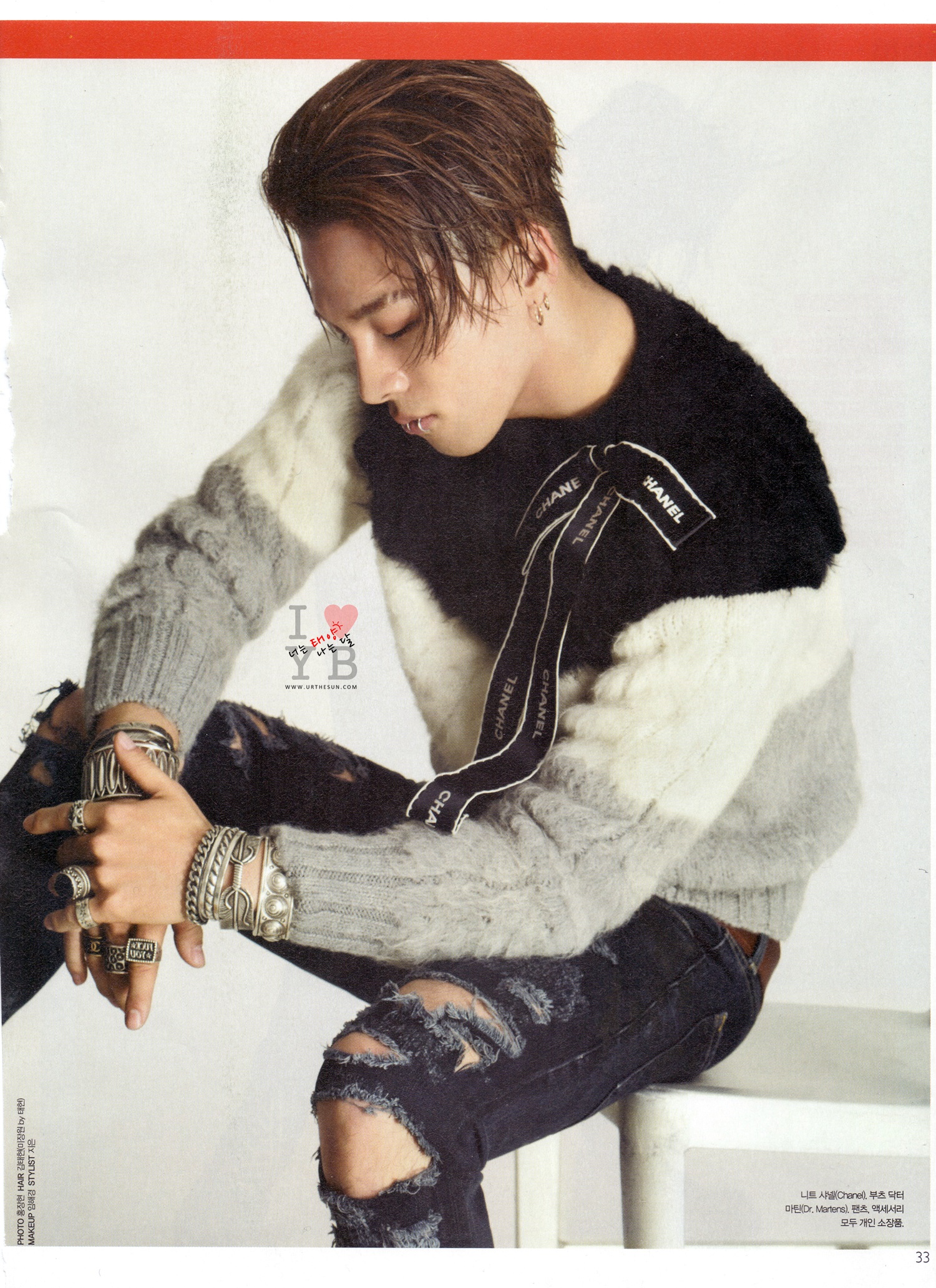 Q. How was the Chanel Paris-Salzburg that you wore for the <Grazia> shoot today?
Taeyang: Everything was pretty. Especially the black, grey, and white sweater that had the angora-like feel to it, I want it.

Q. You can buy it.
Taeyang: I think I will (laughs). Actually, I don’t think I can buy it. I think it’s a sample piece that you can’t buy in Korea.

Q. Do you go shopping often?
Taeyang: Yes. It’s a bit difficult in Korea, but I go shopping a lot when I’m in Paris. They have a lot of sizes, so there’s lots to choose from. The most interesting thing I do in Paris is shopping at Chanel. I’ve never regretted buying clothes from Chanel.

Q. You sound like you’re advertising.
Taeyang: Do I (laughs)? Their clothes are not influenced by period. I’m worried as to how people will accept talks like this. Other members and I are all very masculine, but we all like beautiful things no matter what.

Q. Are you saying that you pursue beauty not only in fashion or also in everyday life?
Taeyang: Yes. I have a lot of favourite works by artists. Rather than liking artworks that follow the trend, I have a certain style that I like. It doesn’t matter whether the work is a street art or a very old classical work.

Q. What kind of style is that?
Taeyang: I’m still in the process of finding my ‘taste’. One thing I know for sure is that I really like beautiful things. I’ve been into things with warm colours lately. I used to like dark and cold things, but now I prefer things like flowers (laughs).

Q. Who have you been into lately?
Taeyang: I’ve liked her for a while. I’ve seen some of her works at the California Museum. She’s a Canadian artist Miriam Schapiro.

Q. Is she a modern artist?
Taeyang: No. Wait a sec. I’ll look her up. The spelling is a bit difficult (He looked up her artworks on his phone and showed them to me).

Q. Do you enjoy going to the museum?
Taeyang: I try to go as much as I can. It’s fun. Wait, I will show you some artworks that I wanted to keep. What do you think? There’re bit oriental, right? It’s like her symbol, or pattern. I heard that she marked a new era in the art industry. What was it called, I studied this….

Q. Do you purchase pieces?
Taeyang:. Yes. I’ve purchased one of her works too. 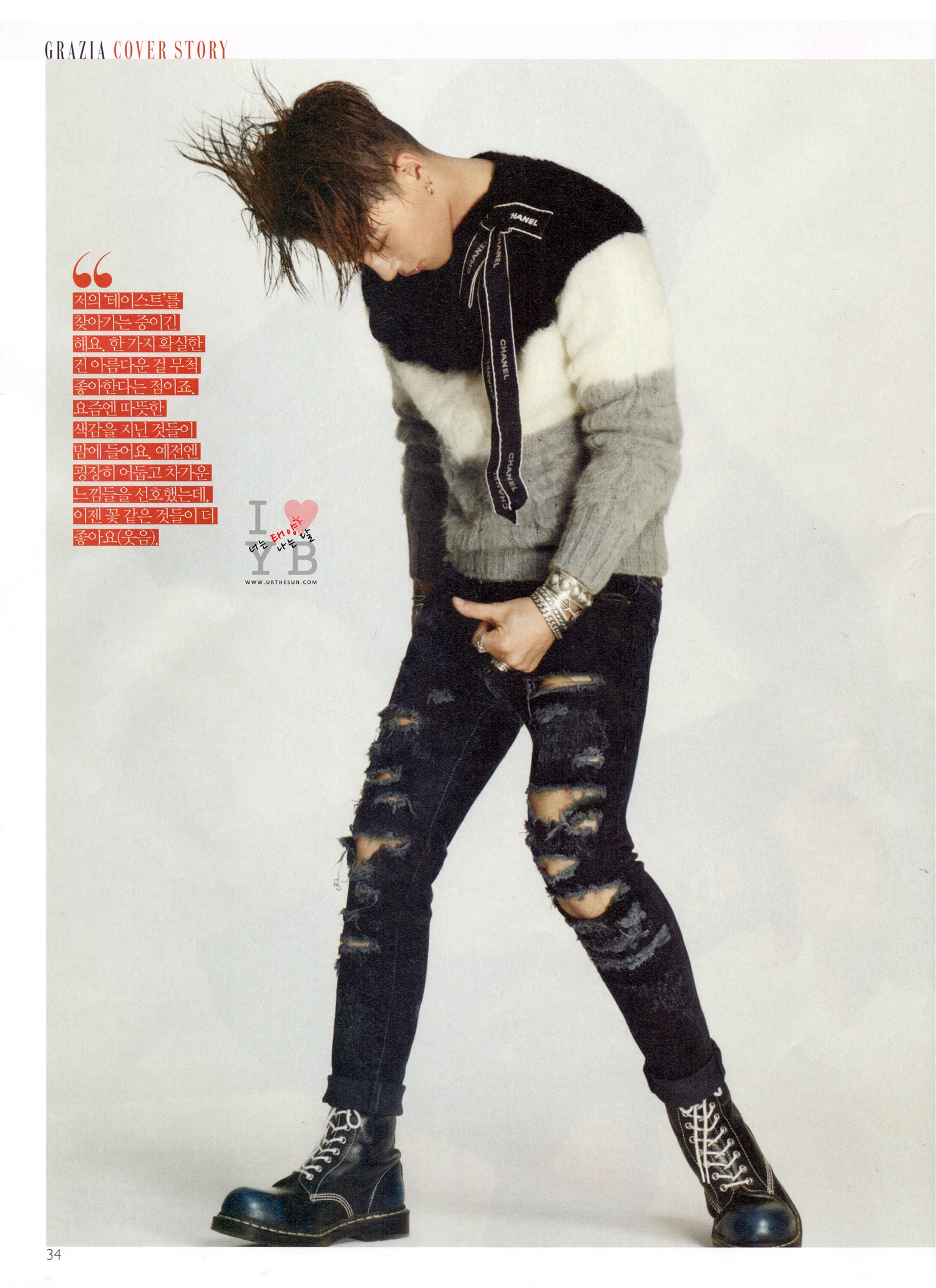 Q. Where did you buy it?
Taeyang: I sent a request to the museum where I found the piece, but they said no (laughs). So I bought it from somewhere else.

Q. Like the Chanel show, there has been and will be many designers visiting Korea. It’s evident that Korea is growing not only in the music industry but in other sectors as well. At what times do you realize this?
Taeyang: I realize this in many ways. When we release an album and go on a world tour, we go to a lot more places than you think. The fact that we can perform at various countries tells us that the interest in the Korean content is growing. Those interests contribute towards the people’s interest in us. I feel lucky that we get to work in a period like this, and I feel thankful. The interest in the Korean content will only grow stronger. To be honest, I’ve been very interested in the Korean traditions. Just like the new music video that we released, we have been showing many Korean traditional items.

Q. Are you talking about the scene in ‘Bae Bae’ MV where you guys wore Hanbok (Korean traditional clothes)?
Taeyang: Yes. We didn’t wear it to promote Korean culture. We wore it simply because we like those things. There are lots of cool parts to the Korean culture. There are lots of Korean structures, or traditional artworks, or clothes, that are very pretty. I think Koreans have had a very high sense of beauty since a long time ago. That’s why there has been so many artists that have reached the realm of beauty.

Q. You’re getting chatty. You really are interested in these things.
Taeyang: Yes. Very. I think it would be fun if we show these parts of our culture. And one thing that foreigners don’t know a lot about is Korean food. The more I tour around various countries, the more I think highly of Korean food. There are similar dishes in other Asian countries, but I think there are lots of Korean food that can’t be found anywhere else. I think there’s our own way of stimulating the taste buds, I’m sure.

Q. Like what?
Taeyang: There’s so many. In the western culture, the only fermented food you can find is cheese, but there’s so many different kinds in Korea. It’s the same with dishes made up of internal organs of animals. Foreigners find it difficult to eat those dishes, but I think they are outstanding. These parts of Korean food lead to the excellence in other parts of Korea. Everything is connected.

Q. You said you want to appear on the show <Korean Food Table>?
Taeyang: I really love that show (laughs). There are lots of food channels today, but this one’s special. They don’t just cook, they cook dishes that you can only experience in that region. For example, things that you can only eat at Mr. Choi’s house. I’m jealous of Mr. Choi Bul Am for being able to experience those dishes.

Q. You can just go and eat there?
Taeyang: Haha. I’m planning on learning how to cook. I didn’t know that I was into cooking this much. I am at a point where I’m memorizing recipes that I see on food channels. Who knows, I might be cooking some day in the future. 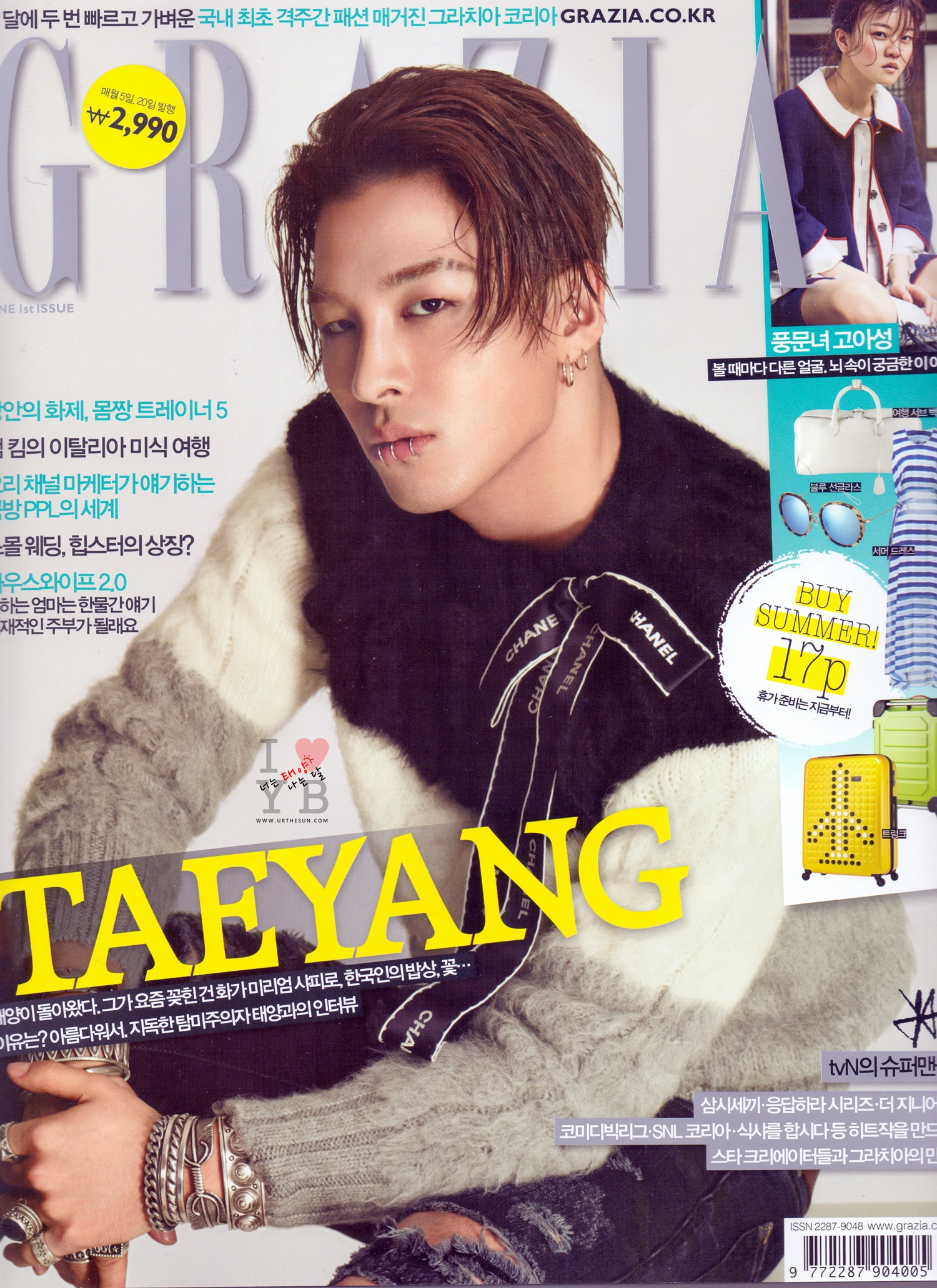