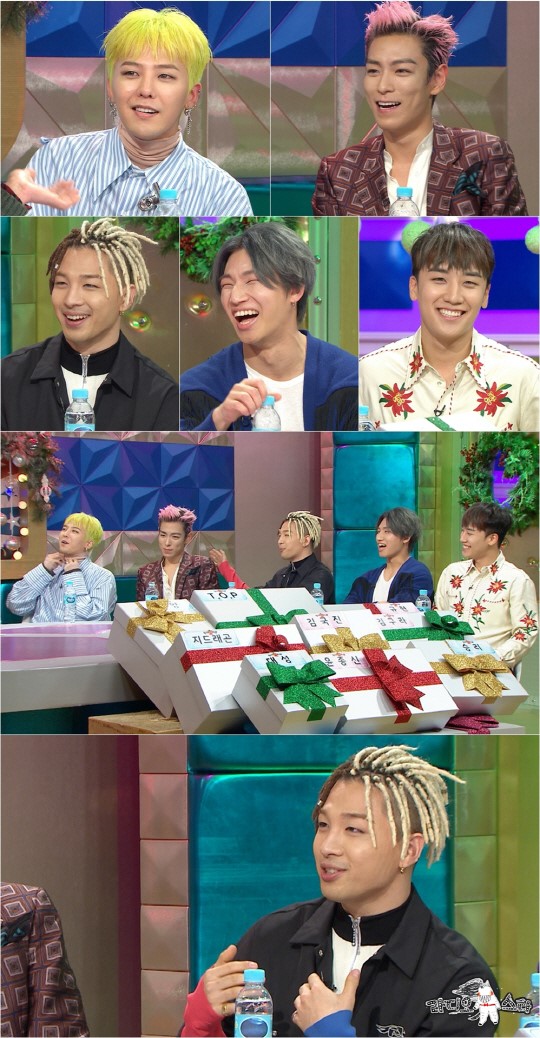 [스포츠조선닷컴=김준석 기자] The complete team of BIGBANG appears in “Radio Star” show for the first time in 10 years since their debut.

Insiders of “Radio Star” show say that BIGBANG members prepared packs of Christmas gifts and boasted their wit and sense of humor by disclosing each other’s secrets, to trigger fans’ anticipation for the BIGBANG episode of the show.

MBC’s “Radio Star” (produced by Kang Young-sun/directed by Hwan Kyo-jin) to be aired on the 21 this month will be “I’m so sorry but I love you BIGBANG” episode. BIGBANG’s G-DRAGON, T.O.P, TAEYANG, DAESUNG, and SEUNGRI will appear in it.

In the recent shooting for the BIGBANG episode of the show, BIGBANG members continuously made all the people there burst into laughter, disclosing each other’s secrets that they came to know for the past 10 years spent together.

First, DAESUNG teased G-DRAGON by mentioning G-DRAGON’s peculiar pronunciation for rapping. SEUNGRI exposed the members’ behind-the-scenes private lives one by one, beginning with a remark, “You know, we have the chatting page for the members only…”

Insiders also say that TAEYANG unveiled the behind story of his song “EYES, NOSE, LIPS” that he wrote with his own story for the first time on TV. That is raising fans’ anticipation for the BIGBANG episode of “Radio Star” even higher.

TAEYANG is also known to have confessed a deep affection for his girlfriend Min Hyo-rin at the shooting for the show, so fans are paying all the more attention to it.

Notably, the four MCs of “Radio Star” and BIGBANG members brought Christmas gifts, which were to be given to the funniest one.

All BIGBANG members wanted to win the gifts, so they competed to reveal each other’s secrets in order to make others laugh and win. Not only the four MCs of the show but also all the people burst into big laughter, according to insiders of the show.

The truth about “EYES, NOSE, LIPS” directly told by TAEYANG, as well as BIGBANG’s behind-the-scenes private lives will be unveiled in “Radio Star – I’m so sorry but I love you BIGBANG” episode to be aired on December 21 at 11:10PM.