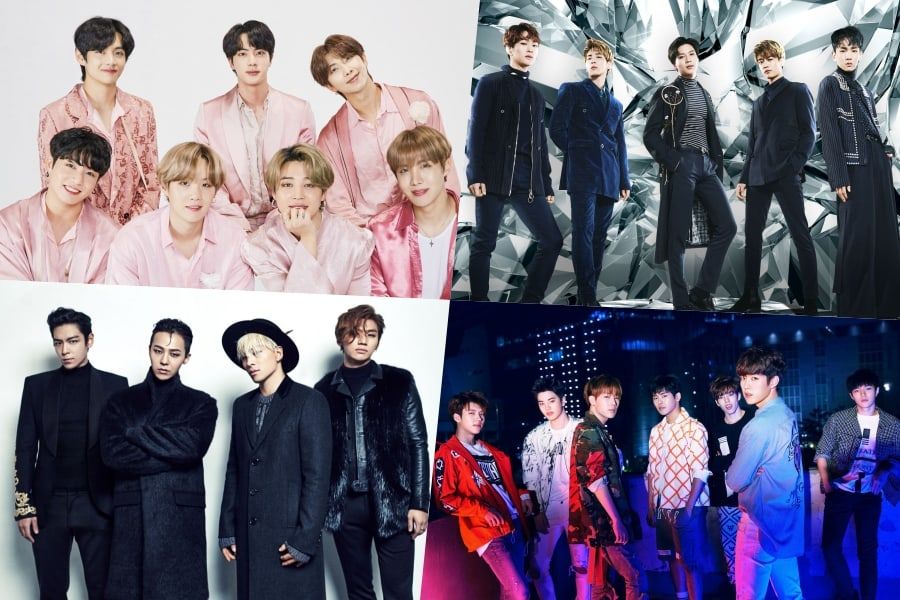 Rolling Stone’s list of the “75 Greatest Boy Band Songs of All Time” is out, and K-pop songs claimed nine of the 75 spots on the list!

In celebration of boy bands’ “continuing impact and dominance,” the American magazine published a list of 75 of the most memorable boy band songs in history, spanning decades of legendary boy bands and stretching all the way back to the Monkees and the Jackson 5.

Check out the nine K-pop songs that made it onto the list below!

Co-written by BTS’s Jin and RM (and performed by Jin), “Moon” is one of the B-sides from BTS’s latest studio album “Map of the Soul: 7.” Rolling Stone describes the airy pop tune, which came in at No. 5 on the list, as a “love song to the fans” that “sums up everything that’s made BTS massive.”

Pointing out the song’s unique structure as a mash-up of two different tracks (“Clue” and “Note”), Rolling Stone praises SHINee’s iconic 2012 hit—which made it onto the list at No. 14—as an example of “how innovative and experimental K-pop can get, even for its most mainstream acts.”

The only K-pop group to appear multiple times on the list, BTS also claimed No. 19 with their beloved 2017 title track “Spring Day.” Rolling Stone refers to BTS’s “sweeping power ballad” as a poignant analysis of “grief and yearning,” applauding its “painfully real lyrics about loss and grief, in whatever form that may take.”

Emphasizing the song’s universal appeal and its key role in bringing K-pop into the spotlight in the United States, Rolling Stone describes BIGBANG’s smash hit as an “instantly accessible single” that “blew off many doors of American crossover with little effort on the band’s part” and that “showcases K-pop’s genre-bending, visually-oriented charms.”

Performed by Jungkook, “Euphoria” is a B-side from BTS’s 2018 album “Love Yourself: Answer” that Rolling Stone praises for its “delicate, flowing melody” and “introspective lyrics about holding onto love.” The magazine also mentions that “‘Euphoria’ showcased a softer, more emotional side to the group, proving that K-pop idols had multiple (musical) cards to play.”

Rolling Stone describes the legendary, oft-covered 2008 TVXQ hit—which took No. 39 on the list—as a “fizzy electro-pop cut” that “established [TVXQ] as critically lauded recording artists in addition to an existing role as a massive chart force.”

Seo Taiji and Boys, often described as ancestors of the current K-pop scene, was the only 20th-century Korean artist to make the list with their 1992 debut track “I Know.” Rolling Stone writes, “The track blended then-trendy American new jack swing with Korean lyrics to tremendous success, spawning a wave of similarly sounding boy bands and girl groups and establishing the scene’s still-strong affection for multi-member outfits as opposed to solo acts.”

Lauding the 2012 hit as “a crown jewel in the discography of famously in-sync K-pop septet INFINITE,” Rolling Stone enthuses, “Opening with a waterfall of Eighties synths, ‘The Chaser’ brought their dramatic, synth-pop sound to an emotional apex via this unforgiving blend of trumpet blasts and dynamic guitar licks answering the boys’ heartfelt belts.”

BTS’s fourth and final song to make the list, “Fake Love” came in at No. 56. Rolling Stone praises its “high-production music video” in particular as “one of the best from BTS, combining stellar choreography, an imposing collection of sets and plenty of dramatic poses.”

Congratulations to all of the groups that made the list!

Which songs would you put on your own list of the greatest boy band songs of all time? Share your thoughts with us below!