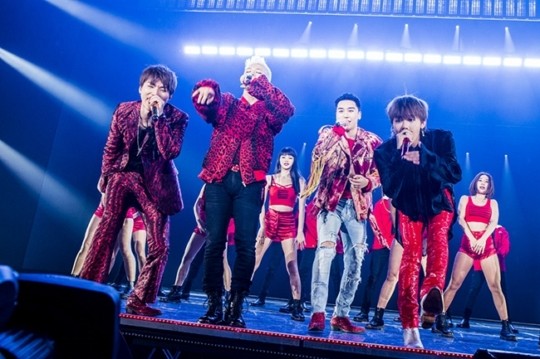 [한국경제TV=유병철 기자] Reunited BIGBANG started their ‘LAST DANCE’ concert in Japan.BIGBANG had a magnificent opening of ‘BIGBANG JAPAN DOME TOUR 2017’ on Fukuoka Yahuoku! Dome during November 18th and the 19th. The 50,000 crowd that filled up the stadium responded more energetically than ever.BIGBANG became the first foreign artist in Japan to open a ‘5-year consecutive Japan dome tour’. This 4-city dome tour will be consisted of 14 concerts and is expected to hold 686,000 audiences.BIGBANG started the opening with ‘HANDS UP’. When the members appeared on stage, roar from the crowd filled up the stadium. While performing ‘LOSER’, the performance was held in a moving stage as a consideration from members that wanted the audience sitting far away to enjoy the concert at a closer range.G-DRAGON stated, “Like the love you gave us, our love for you won’t change. Until the day we meet again, let’s smile at each other and perform our ‘LAST DANCE’”.In succession, BIGBANG performed ‘FANTASTIC BABY’ and ‘BANG BANG BANG’ raising the mood, and the audience singing along filled the entire dome. The 3-hour period was filled with 25 hits, without a gap. The local press was eager to report BIGBANG’s dome tour. The 6-major press including Sports Hochi, Sports Nippon, Nikkan Sports, Daily Sports, Tokyo Chunichi Sports, and Sankei Sports all put BIGBANG’s news on the headlines, proving their reputation as a top-class artist.Meanwhile, Japanese solo album releases by members have been confirmed. G-DRAGON’s solo mini- album ‘KWON JI YONG’ will be released on December 13, DAESUNG’s ‘D-LITE 2’ on December 20, and TAEYANG’s solo album ‘WHITE NIGHT’ on January 10.When the dome tour in Japan is finished, BIGBANG will decorate the finale of ‘LAST DANCE’ in Seoul. For two days from December 30 to 31, a year-end concert will be held in Seoul Gocheok Sky Dome.The second ticket sales will begin on November 21, 8PM KST through Auction.2017. 11. 20.