BIGBANG is listed in American Forbes’ “30 Under 30 Music: Gallant, Bigbang, Daya, Logic And The Class Of 2017” 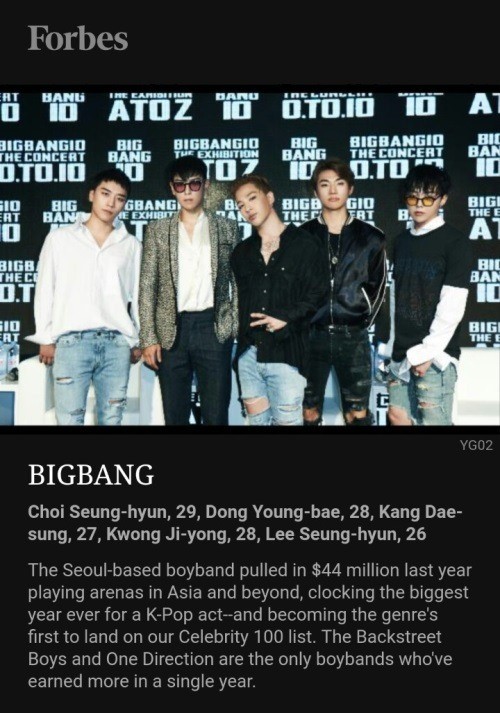 [헤럴드POP=황수연 기자] BIGBANG is listed in “30 Under 30 Music: Gallant, Bigbang, Daya, Logic And The Class Of 2017” selected by American economic magazine Forbes.

Singers, songwriters, managers, and businessmen who are creating seismic changes in the music industry around the world have been selected for the “30 Under 30 Music” list.

BIGBANG put their name in the list along with top-class young artists including famous American R&B vocalist “Gallant”, rapper “Logic”, and R&B icon “Jeremih”, to prove their outstanding presence in the global music scene.

In 2016, BIGBANG was listed in Forbes’ “Celebrity 100” and “The 30 Highest-Paid Celebrities Under 30”, to stand under a big spotlight for their10-year musical career.

In the meantime, BIGBANG will hold “BIGBANG10 THE CONCERT : 0.TO.10 FINAL IN SEOUL” on January 7 and 8 at Gocheok Sky Dome in Seoul, Korea.