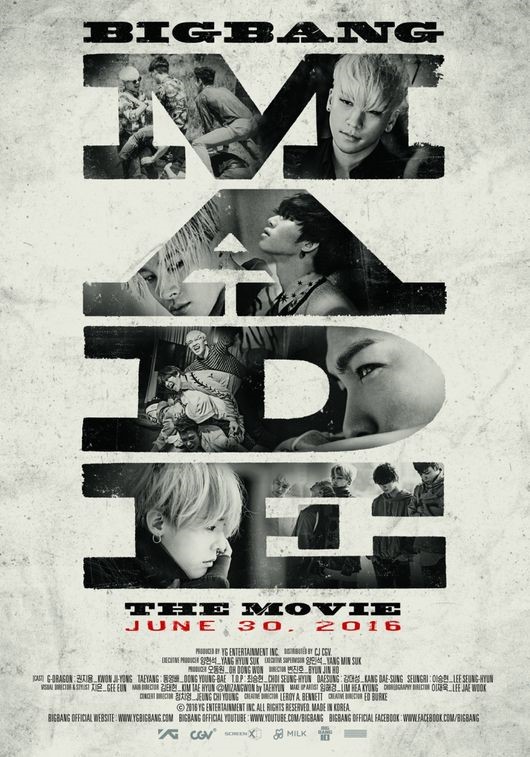 [OSEN=정준화 기자] While BIGBANG hinted on the launch of a series of projects for the 10th anniversary of their debut, the first one has been confirmed to be film “BIGBANG MADE”.

On June 1, YG Entertainment unveiled a poster of “BIGBANG MADE” on the company’s official blog (www.yg-life.com) and social media channel, to introduce the first project for the 10th anniversary of BIGBANG’s debut.

The film will be released by CGV on June 30 (Thu.). It is a film about BIGBANG’s second world tour “MADE” that drew 1.5 million fans to 66 concerts in 32 cities of 13 countries including Seoul, Korea, cities in Oceania, North and Central America, and Asia.

The film depicts the long journey of BIGBANG’s world tour from April 2015 to March this year. It unveils fancy and professional BIGBANG on the stage, as well as what BIGBANG’s daily lives are like as men in their twenties.

As BIGBANG say in an interview for the film, “I feel like all of us were born to be BIGBANG”, now there is no boundary between Gwon Ji-yong, Dong Young-bae, Choi Seung-hyun, Kang Dae-sung, and Lee Seung-hyun, men in their twenties, and the members of BIGBANG. The film well-demonstrates the fact.

Notably, it depicts what BIGBANG is actually like, without any intentional settings, at the request of the members. Plus, in the film, the members talk about what they really feel about the renewal of contract with YG during the tour and they also make jokes to one another unlike what they show on the stage. As such, it will be a good opportunity for fans to see new aspects of BIGBANG, which have been unknown for the past 10 years.

The film will be released in the format of “screen X” in which three sides of the theater are the screen. It will enable the audience to feel like they are actually at the BIGBANG concert, giving them better sense of immersion and excitement.

After the release of project film “BIGBANG MADE”, BIGBANG will carry out other projects in celebration of the 10thanniversary of their debut.

The film for the 10th anniversary of BIGBANG’s debut is released in collaboration with Samsung Eelectronics’ music service “MILK” and a variety of exclusive events will be offered by MILK.