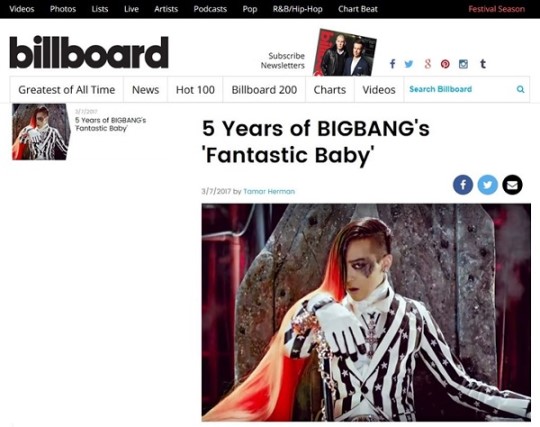 On March 7 (local time), Billboard spotlighted BIGBANG’s enormous influence by saying, “Trends come and go pretty quickly in music, particularly in the K-pop industry, but the staying power of some hits can’t be denied. On March 7, 2012, Korean boy band BIGBANG released the music video for their single ‘Fantastic Baby’, and fans around the world have been saying ‘Wow, fantastic baby’ ever since.”

Billboard went on to say, “While they were already dominating the local popular music scene, the South Korean act produced one of the few K-pop songs to garner attention internationally with ‘Fantastic Baby’, in part thanks to the song’s dynamic sound and the stimulating visual feast that is the music video.”

Billboard also said, “With the exhilarating song and a video that took K-pop to a whole new level through its creative flair… This immense visibility has led ‘Fantastic Baby’ to have a long-lasting effect on Hollywood in the five years since it was released. In 2012, just months after ‘Fantastic Baby’ came out, an episode of Glee featured the song as background music… Three years later, ‘Fantastic Baby’ was still making an impact internationally and was featured in the trailer for Pitch Perfect 2, although the song was not included on the film’s official soundtrack.”

Even though fans will not be able to complete team of BIGBANG for some while, each member will continue to actively perform as a solo artist this year.